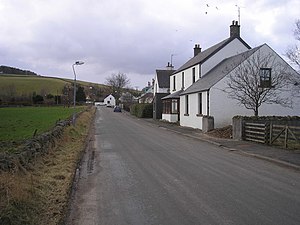 Heriot is a village and parish in Midlothian situated on the A7 road ten miles south of Dalkeith. It is bounded by the parish of Innerleithen in Peeblesshire and by the parishes of Temple, Borthwick, Fala and Soutra, and Stow. It is situated in the valley of the Heriotburn. It is ten miles long and six broad. The surface is hilly and moory, containing part of the Moorfoot range. The principal summits are Blaketip Scars and Dewar Hill. The parish also includes Broomieknowe, Fala Hill Inn, and Robertson.

Formed by the confluence of Blackhope, Hope, and Dewar Burns, which all three have their source near the Peeblesshire border, Heriot Water winds 4¾ miles east-north-eastward through the interior, till it unites with Gala Water, itself rising on the northern verge of the parish.

The manor of Heriot anciently belonged to the Morvilles, and subsequently to Roger de Quincy, by whose daughter it was granted, with its church and appurtenances, to the monks of Newbattle, who held it until the Reformation, when the Ker family became possessors of the parish.

There are some erect stones said to be of Druidical origin. Traces of camps are seen on the hills. At Dewar farm two stones bear the name of "The Piper's Grave". "Lot's Wife's Pillar" stands near. Wolf Cleugh. Near Heriot House is Mary Gibb's Stone, so called from a woman of that name who was burned upon it on the accusation of witchcraft.

This Midlothian article is a stub: help to improve Wikishire by building it up.