Newtongrange is a former mining village in Midlothian. It is known in local dialect as Nitten, or Nitten by the Bing.[1]

Newtongrange became Scotland's largest mining village in the 1890s, with the sinking of the Lady Victoria Colliery and a shaft over 1600 feet deep. This closed in 1981 but today houses the National Mining Museum.

From its humble beginnings in 1843 with 100 souls, the church in Newtongrange grew to see its roll rise to over 1,000 in the 1950s. On 16 January 2003, the parishes of Newtongrange and Newbattle united to form a new Newbattle parish. The new parish is in fact that which existed before the Disruption of the Church of Scotland in 1843.

Newtongrange is known for its yearly Brass in the Park event, where brass bands play live over three days. The Newtongrange Silver Band became Scottish Brass Band Champions in 2005.

The National Mining Museum in Newtongrange stands on the site of the old Lady Victoria Colliery. (It has been designated an 'Anchor Point' of the 'European Route of Industrial Heritage'.)

The original Victoria Park was used as a speedway training track in the 1950 and the trainees raced as Newtongrange Rockets. The sport was revived briefly in 1970 and in 1973. The team of 1970 was known as Newtongrange Saints while in 1973 the team were known as Edinburgh Monarchs. Victoria Park's track become the home to stock car racing before its closure and redevelopment for housing.

Newtongrange was once on the railway, cut off when the network contracted. However it should soon see the return of the Waverley Line for which new station has been built near Murderdean Road, giving rail access to Edinburgh (Waverley Station) and Middle Shires, all the way eventually to Carlisle in Cumberland. 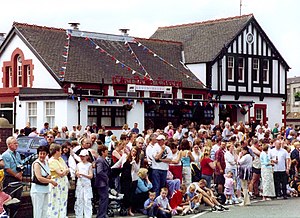 In Newtongrange stands the Dean Tavern, a rare example of a Gothenburg pub.

The premise of Gothenburg pubs was that they were not to be attractive or welcoming, in order to discourage drinking and the sales of spirits was not to be encouraged. The shareholders of the trust were to receive a maximum return of 5% annually and all other profits were to be used to benefit the local community. The town treasury was to control this income and use it to provide libraries, museums, parks and other community facilities. The local coal companies were often a source of funds to establish these systems.[2]