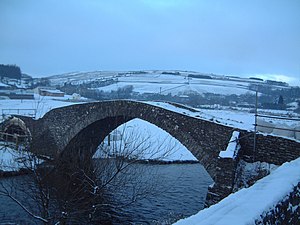 Stow is a parish in southern Midlothian. That part of the ancient parish that extends into Selkirkshire falls under the civil parish of Caddonfoot. The name 'Stow' is from Old English, meaning simply 'place'. In the 2011 Census the population was 718.

The parish contains the eponymous village and the hamlets of Fountainhall, Kylochyett, Caitha, and Crosslee. The surface is hilly, and intersected by numerous streams, which fall into the Gala and the Tweed. The rocks are graywacke and clay slate. In this parish are numerous ancient camps and square towers on parallelograms, the ruins of which are still to be seen.

The village of Stow is about seven miles north of Galashiels and 24 south-east of Edinburgh on the A7 road. Sheltered by hills on all sides, it lies 580 feet above sea-level on banks of the Gala Water. On the western bank there is a railway station on the former Waverley route from Edinburgh to Tweedbank.

The area anciently went by the name of Wedale, i.e. "the Vale of Woe", and belonged to the bishops of St Andrew's, who had a regal jurisdiction over the whole district of Wedale. There has been a church at Stow since the 7th century, but the earliest example still visible today was built in the late 15th century on the site of the Church of St Mary which was consecrated on 3 November 1242. The church used today, St Mary of Wedale, was built in 1876 and features a 140-foot-high clock tower. Our Lady's Well is situated a mile south of the village and was rebuilt in 2000.

A rare example of a packhorse bridge, built in the 1650s, can be found in Stow. Stow was an important place in the woollen and agricultural industries in the 19th century.