Roslin (sometimes spelt Rosslyn or Roslyn) is a village in Midlothian, seven miles to the south of the Scottish capital city Edinburgh. It is approximately 12 miles from Edinburgh Airport.

The name Roslin (c. 1240 Roskelyn) probably derives from the Old British language or Pictish ros ('moor'), and celyn ('holly'). Fantasies woven around the modern myths of the Rosslyn Chapel propounded a derivation from 'Rose line', a supposed early mediæval meridian passing through Paris and Rosslyn Chapel.

Legend has it the village was founded in the year 203 by Asterius, a Pict.

In 1303 Roslin was the site of the Battle of Roslin between John III Comyn (as Guardian of Scotland) and Sir John Segrave, a commander of King Edward I.

In 1446, Rosslyn Chapel was constructed, under the guide of William Sinclair, 1st Earl of Caithness.

Roslin became important as the seat of the St Clair family. In 1456 King James II granted it the status of a burgh. Coal mining has been a major occupation from the twelfth to the late twentieth centuries.

From the 19th Century onwards the attractions of the Glen, Castle and Chapel developed Roslin as a popular tourist destination. Notable visitors included J M W Turner,[1] William Wordsworth (who wrote a poem in the chapel whilst escaping a storm)[2] and his sister Dorothy, who wrote “'I never passed through a more delicious dell than the glen of Rosslyn”.[3]

On the north-western side of the village formerly was The Roslin Institute, a biological research establishment, where in 1996 Dolly the sheep became the first animal to be cloned from an adult somatic cell.[4] It moved to Easter Bush in 2011.

The village sits on the west side of Roslin Glen, now a country park. Overlooking the Glen are the Rosslyn Chapel and Roslin Castle. 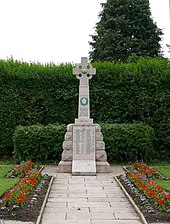 Rosslyn Chapel is an elaborately carved chapel erected by William Sinclair in 1446, and in modern times it has attracted mythical associations with the Knights Templar and the Grail legend:[5] in this guise it featured in the novel The Da Vinci Code. The popularity of the book and the use of the chapel as a location in the subsequent film greatly increased the number of visitors to the village.

Rosslyn Castle, owned by the family of the Earl of Rosslyn since the 14th century, is in partial ruins.[3] The habitable parts are let as holiday accommodation.[6]

A monument cairn erected by the Roslin Heritage Society at the end of last century, marks the site of the Battle of Roslin.