Edgehead, also known as Chesterhill is a village in Midlothian.

Edgehead is to be found east of Dewartown and Mayfield, northwest of Pathhead and southeast of Dalkeith. Two areas of woodland, Windmill Wood and Chesterhill Wood, are located beside the northern end of the village.[1]

The village was originally known as Chesterhill, which is presumed to refer to its being a hill on which was an ancient Roman camp. The name 'Edgehead' was technically the name of the farm at the top of the hill.[2] However the opening of the Edgehead Colliery in the nineteenth century had the effect of applying the farm name more generally to the village which gathered around it.

The village developed along the long straight Roman road known as Dere Street, and remains linear in nature. It expanded in the 19th century when a coal mine was opened in Windmill Woods. The village once contained four shops supplying both residents and local farms. It was designated a conservation area in 1982. The population of Edgehead was estimated at 115 in August 2008.

Edgehead Colliery was a coal mine located in Windmill Woods in the 19th and 20th century. It was initially owned by the Earl of Stair. Around 1930 ownership transferred to the Fordel Mains (Midlothian) Colliery Company, and it became part of the National Coal Board in 1949 and was closed in 1959.[3] In 1842 the mine employed 127 workers; by 1959 this had fallen to 40.[1] 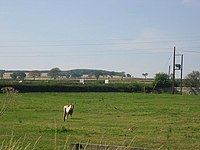 Edgehead has no local shops left. It does have a small park and children's play area near the top of the village.

Edgehead is on a minor road which runs from Pathhead to join an unnumbered road north of Whitehill which leads to Dalkeith. The road into Dalkeith previously formed part of the trunk A68 road, but was bypassed in September 2008 to relieve traffic congestion in Dalkeith town centre. There is some evidence from 17th-century maps to suggest that the road through Edgehead was part of the main route between Edinburgh and Lauder now part of the A68.[6] It was originally part of the Roman road Dere Street, which ran from York to Cramond.[1]