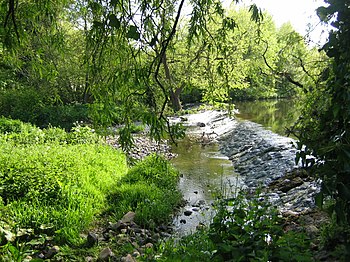 The River Tyne is a modest river 30 miles long which rises in Midlothian and descends to spend most of its course in East Lothian.

The source of the Tyne is in the Moorfoot Hills in Midlothian near Tynehead, which takes its name from the spring. Its mouth is on the North Sea coast, near Belhaven.

The main headwaters of the Tyne come from the Moorfoot Hills; the Tyne Water is joined by the Birns Water a mile or so east of Easter Pencaitland in the grounds of Saltoun Hall. The Humbie Water joins then below.

The Tyne flows past Easter Pencaitland, Saltoun Hall, Nisbet, Badger Wood, Herdmanston Mains, Begbie and beneath he Grants' Braes Bridge on B6368. Passing on to Clerkington and Clerkington Mill it soon comes to East Lothian's county town, Haddington.

Haddington is the first sizable town on the River Tyne, which winds through, beneath the town's bridges.

The river passes by Hailes Castle and Hailes Mill and passes Brae Heads, north of Traprain Law. Soon it comes to East Linton and under the A199 bridge. Phantassie Farm, the birthplace of John Rennie, the engineer, is on the Tyne, with its well know Phantassie Doocot.

Tyninghame, further down the stream, is named for the river; Tyninghame House stands north of the Tyne.

At the coast the Tyne reaches its mouth on the North Sea, opening into Belhaven Bay, where the Tyne Sands spread along the coast.

The tributaries joining the Tyne include:

Spilmersford Bridge to the Tyne Estuary