Mid Calder is a town and parish in Midlothian. It is located in the west of the county on a steep hill overlooking the River Almond (which forms the border with West Lothian) and Calder Wood, around fifteen miles west of Edinburgh. The town has been on a major crossroads since its origin some time in the eleventh century.

James Sandilands received the lands of Calder from his brother-in-law, William IV, Lord of Douglas, in the 14th century. During the mediaeval wars, Sir James de Sandilands distinguished himself in the wars against the English and for his services he was rewarded with a royal charter of his lands by King David II. James was well connected and married Eleanor, the only daughter of Sir Archibald Douglas, Regent of Scotland.[1] The gift included extensive estates in the western parts of Midlothian, and the Barony of Calder.

After the Reformation in 1560, Sir James Sandilands, the head of the Sandilands family, was created Lord Torphichen. Since 1348 the family seat has been at Calder House, near the middle of the village. 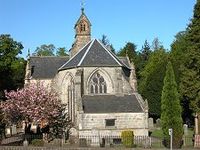 Several main drove routes came together at Mid Calder, down which were driven the cattle brought from the Highlands to the great trysts at Crieff and Falkirk and thence southward over the Southern Uplands. Huge herds of cattle would come across fords or bridges over the River Almond before crossing the Pentland Hills to West Linton. The peak year was 1840 when some 150,000 cattle passed through the area over the three months from August to October. This traffic helped support no fewer than nine public houses in the village.

Meanwhile, Mid Calder also lay on the main turnpike road from Edinburgh to Glasgow, adding a steady flow of east-west traffic to the seasonal influx of drovers heading south. However, the importance of the turnpike lessened at the same time as the cattle droving stopped, and for the same reason: the railways. And for once the acumen and foresight that had allowed the Sandilands to retain their position for so many centuries missed a beat. When the railway came to West Lothian in 1848, the then Lord Torphichen decreed that it should not come near Calder House.

As a result, Mid Calder was served by a station at Kirknewton, three miles away which was called Mid Calder until 1982. This meant that adapting to the loss of its traditional sources of income could have been difficult for the village. But at precisely the right moment the world's first oil boom occurred, in Midlothian and West Lothian. This was based on oil extracted from shale, and by 1870 over 3 million tons of shale were being mined each year in the area around Mid Calder. Output declined with the discovery of liquid oil reserves around the world in the early 1900s, but shale mining only finally ceased in 1962. The "bings" that characterise oil shale mining elsewhere in this area have largely been flattened around Mid Calder and the land reclaimed for recreation, industry and housing. 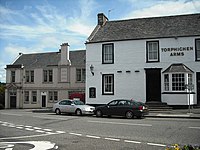 Another major factor leading to Mid Calder's current prosperity has been the dramatic growth of nearby Livingston, now the second largest settlement in the Lothians and whose main shopping centre is only a mile to the west.

The outlying areas of Mid Calder were heavily built upon in the 1980s, and as a result, middle-class housing estates are a stone-throw away from both Calder House and woodlands.

In 2005, Mid Calder was subject to unwanted publicity when it became the first place in Britain to issue an ASBO in a village-wide crackdown on the anti-social behaviour of drunken teenagers.[2] The ASBO allowed police to disperse any young person found outdoors. After one month of operation, the order was deemed a success and to this day, Mid Calder remains one Central Scotland's most desirable village locations.

The Church of Scotland church in Mid Calder is known as the Kirk of Calder. The present Kirk dates from 1541.