Crichton Castle is a ruined castle standing at the head of the River Tyne, near the village of Crichton in Midlothian. The castle stands two miles south of the village of Pathhead, and the same distance east of Gorebridge. A mile to the south-west is Borthwick Castle.

In the late 14th century John de Crichton (d.1406) built a tower house here as his family residence. John's son, William (d. c. 1453), served as Lord Chancellor of Scotland, and was made Lord Crichton in c. 1443. In 1440 he had been partly responsible for organising the "Black Dinner", where the young Earl of Douglas was murdered. As a result, he obtained the Douglas property of Bothwell Castle in Lanarkshire for himself. John of Corstorphine, chief of Clan Forrester and a Douglas adherent, stormed and slighted the castle in 1445 in retaliation. William, however, reconstructed and extended the castle, and also built the nearby collegiate church.

The 3rd Lord Crichton was a supporter of Alexander Stewart, Duke of Albany, and his lands and titles were forfeit in 1483, when Albany was sentenced for treason. Crichton Castle, along with Bothwell Castle, was briefly granted to Sir John Ramsey, who forfeited it in 1488.

That year, King James IV granted Crichton to Patrick Hepburn, Lord Hailes, who was later made Earl of Bothwell. His son, the second Earl, died at the Battle of Flodden in 1513. Adam was succeeded by his son Patrick, who intrigued with the English against the Scottish crown, but eventually made peace with the regent, Mary of Guise. James Hepburn, 4th Earl of Bothwell sided with Mary of Guise during the Scottish Reformation, butthese were treacherous times and the Regent James Hamilton, 2nd Earl of Arran found cause to order an assault on Borthwick and Crichton; the castle was besieged and captured by the 3rd Earl of Arran on 3 November 1560.[1]

The castle was the scene of the marriage and wedding festivities, on 4 January 1562, of Patrick's daughter Jean (d. before July 1599) and her first husband, John Stewart, Lord Darnley, Prior of Coldingham, and illegitimate son of King James V. John Stewart's half-sister Mary, Queen of Scots, spent a few nights at the castle while attending this wedding.

The castle ruins in the late 18th century

The Earl of Bothwell was implicated in February 1567 in the murder of Queen Mary's husband Henry Stuart, Lord Darnley, and became Mary's third husband in May of that year. In December, all Bothwell's titles and estates, including Crichton, were forfeited.

In 1568, Crichton, along with Bothwell's other estates, was granted to Francis Stewart, son of John Stewart, Lord Darnley, and Jean Hepburn, and thus bastard grandson of James V. Francis travelled in Europe, and he designed the very modern Italianate north range in the 1580s. He was created Earl Bothwell in 1577, but conspired against the young James VI, and was accused of witchcraft. He forfeited his estates in turn in 1592, and was forced to flee to Naples. His son Francis was reinstated, but laboured under his father's debts, and sold Crichton to the Hepburns of Humbie.

In 1956, the castle was given into state care by its owner, Major Henry Callander of Preston Hall. J M W Turner painted the castle, and it features in Sir Walter Scott's poem Marmion.

Crichton was also used as a location in the 1995 film Rob Roy. It is now a Scheduled Ancient Monument administered by Historic Scotland. 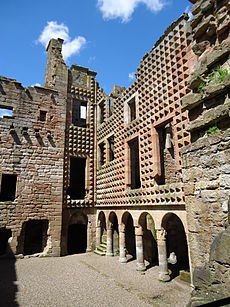 The north west corner of the courtyard

Crichton Castle comprises four contiguous buildings arranged around an inner courtyard. The 14th century tower lies at the east of the castle, and has a vaulted basement with timber entresol, and a vaulted hall above, although the south-west corner of the tower has collapsed. To the west of this tower was a barmkin. William Crichton extended the castle in the early 15th century, building a second tower to the south, forming a strong L-plan, with the gate between the two towers. The south tower was entered by a door in the centre, with vaulted cellars either side. Two halls occupied the first and second floors. In the later 15th century a west block was added, with a six-storey tower at the southwest, containing several bedrroms with garderobes. A stair in the south block gave access to these rooms. The north range was added at this time, closing the courtyard, but this section was heavily rebuilt in the following century.

The castle's most distinctive feature is its Italian-influenced courtyard façade, which forms part of the north range. Francis Stewart, the designer, had travelled to Italy, and was inspired by new styles and technology in buildings there, particularly the Palazzo dei Diamanti in Ferrara (c. 1582). This was the source of the diamond rustication on the courtyard wall. The initials of Francis and his wife Margaret Douglas appear on the walls, together with an anchor representing Stewart's position of Lord High Admiral of Scotland. Inside are further innovations; Scotland's first scale-and-platt stair, which is to say a modern-style staircase with landings,[2] and a drawing room to the north of the old tower.

To the south of the castle is a building which may have been used as a stable block, slaughter house or chapel.[3] This building is said to be haunted by the ghost of William Crichton.[4]