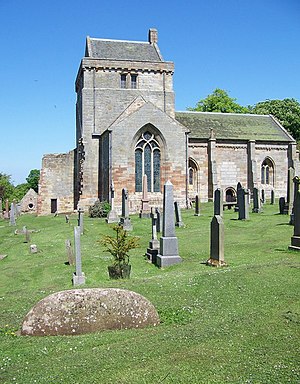 Crichton is a village and parish on the eastern border of Midlothian on the A68 road from Edinburgh to Lauder, five miles south-east of Dalkeith. The parish contains, at its northern extremity, the village of Pathhead. Tynehead and Fala Dam hamlet (2¾ miles south-east of Pathhead) also belong to Crichton, which is bounded to the north-east by Cranston and by Humbie in East Lothian; south-east by Fala and Soutra and Heriot; and west by Borthwick. The village itself is located to the south of Pathhead on the B6367 road.

The rising ground at Longfough, commanding a wide and beautiful prospect, is crowned by remains of a fort, supposed to be a Roman camp; but Crichton's chief antiquities are Crichton Castle and Cakemuir Castle, the former a massive ruin, forming the grand feature in the landscape.

This Midlothian article is a stub: help to improve Wikishire by building it up.