Temple is a village and parish in Midlothian, to the south of Edinburgh; the village lies on the east bank of the River South-Esk.

Historically the Parish of Temple was divided into three portions, the ancient parish of Clerkington, and the Chapelries of Moorfoot and Balantrodach. Clerkington was a parsonage held by the Monks of Newbattle Abbey, Moorfoot was a chapelry founded by Monks from the same institution. Balantrodach on the other hand, was a Chapelry of the Knights Templar. 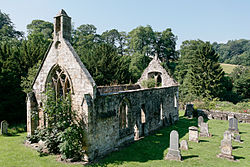 The Temple Church at Temple

In 1127, Hugues de Payens, the first Grand Master met King David I and was granted the lands of Balantrodach.[1][2] In 1129, the Council of Troyes formally recognized the Order. Balantrodach became their principal Templar seat and Preceptory in Scotland until the suppression of the order between 1307 and 1312.

As Temple, being just to the South of the Firth of Forth, was an area of the country occupied by England at this time, Knights were prosecuted, but not all were found guilty.[3]

Following 1312 and the Papal Bull (edict) entitled Ad providam, King Edward II of England dissolved the Templars in both England and Scotland. According to the edict, all Knight Templar property was to be seized and handed over to the control of the Knights Hospitaller, who had a preceptory at Torphichen, although North of the Firth of Forth, King Robert the Bruce, being under interdict at the time, was reluctant to do so.[3]

Many Templar Knights may have assimilated within the Hospitallers. But it's not necessarily the case that the Templars everywhere, immediately ceased to be.[1] Indeed, North of the Firth, in Scotland the Order combined with the Hospitallers and continued as The Order of St John and the Temple until the reformation.[4]

"Legend has it that treasure of the Knights Templar was removed secretly from Paris, to be hidden in Temple. A local legend states: 'Twixt the oak and the elm tree/You will find buried the millions free.' French legends about the Templar treasure apparently also state that the treasure was taken to Scotland, with the knights landing on the Isle of May, the first island they would encounter in the Firth of Forth. Geographically, this would take them to the mouth of the river Esk, which could take them on to Rosslyn..."[3]

Following the Reformation the present parish was formed from the three older divisions. In 1618, it took its name Temple from the preceptory chapel which had by then become the parish kirk.

In the following centuries Temple became a bustling agricultural village, but in recent years it has become a dormitory village for nearby Edinburgh.

Temple has two large houses in the vicinity: