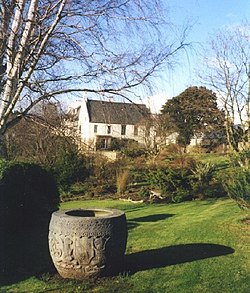 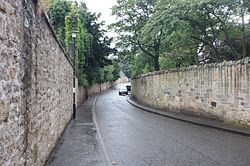 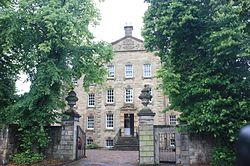 A typical mansion in Inveresk Village 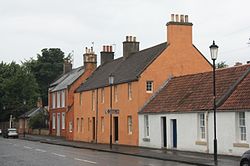 Typical 18th-century houses at the east end of Inveresk Village

Inveresk is a village in Midlothian situated immediately to the south of Musselburgh, and a parish including the town. It forms one of the finest conservation areas in Scotland having been designated a conservation area since 1969. It is situated on slightly elevated ground on the north bank of a loop of the River Esk. This ridge of ground, 60 to 80 feet above sea level, was used by the Romans as the location for a fort in the 2nd century AD.[1]

The element "Inver", from the Gaelic inbhir, refers to the confluence of the river Esk with the Firth of Forth.[2]

Inveresk is notable for its fine street of 17th- and 18th-century houses. Inveresk Lodge is now privately leased, but the adjacent Inveresk Lodge Garden belongs to the National Trust for Scotland, and its west facing gardens overlooking the river Esk are open to the public. This was formerly the mansion of James Wedderburn who had made his fortune as a slave-owning sugar plantation owner in Jamaica. When his son by one of his slaves, Robert Wedderburn, travelled to Inveresk to claim his kinship he was insultingly rejected by his father who gave him some small beer and a broken or bent sixpence. This experience turned Robert Wedderburn to radicalism.

The village is dominated by the disproportionately large St Michael's standing at its west end on the apex of the local hill, viewing down over Musselburgh. It has a truly huge and even more disproportionate graveyard/cemetery stretching westwards for almost 300 yards split into separate walled sections (marking its various stages of extension) which can be broadly bracketed as original (mainly 18th century), a late Victorian extension, an Edwardian/ early 20th century extension to the north, and a modern section to the far west.

The current church is by Robert Nisbet and dates to 1805 and has a remarkably fine stone spire of Wren-influence but is believed to date to the 6th century.[3] 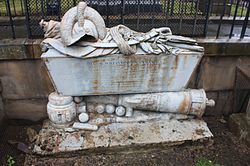 Not unsurprisingly, this huge graveyard has a number of interesting graves:-

Other Notable Persons linked to Inveresk