Leith is a town in Midlothian which serves as the port of Edinburgh. It stands in the north of Edinburgh at the mouth of the Water of Leith on the south shore of the Firth of Forth.

Up until the late 16th century Leith was two separate towns, on either side of the Water of Leith.

South Leith was the larger town, coming under the jurisdiction of St Cuthbert's in Edinburgh. It was based on trade and had many merchants' houses and warehouses. This was the main side for ships offloading cargoes.

North Leith was smaller but proportionately richer, coming under the jurisdiction of Holyrood Abbey. It was effectively one street: now Sandport Street and Quayside Lane. Long riggs ran down to the river from each house.[1] This was the shipbuilding side of Leith. Several wet and dry docks existed, including the first dry dock in Scotland (1720). A small peninsula of land on the east bank also came under the same jurisdiction, on what is now Sheriff Brae/Sheriff Bank.

The first bridge was built in 1496 to link the towns, by Abbot Bellenden, who controlled the church at North Leith built at the same time. It was a toll bridge, the income supplementing the church's income. The bridge was demolished in 1780 to allow ships to get further upstream.

The church in North Leith is now Leith's oldest building (albeit somewhat altered).

After the Reformation Leith was governed by the Town Council of Edinburgh, with separately organised baillies appointed by various bodies without contact with each other. The result became vary unsatisfactory, and half of Leith was provided with no municipal government whatever or any local magistrate]s. An 1827 Act of Parliament arranged for municipal government and administration of justice in the town, providing watching, paving, cleansing, and lighting, with Edinburgh Council responding to the views of Leith townspeople. On 1 November 1833, Leith became a separate Municipal Burgh, with its own provost, magistrates, and council, and was no longer run by bailies.

Leith has several churches, some of which are notably historic. They include:

There is a long history of worship in Leith which can be dated back to at least the 12th century. After the Scottish Reformation the principal parish kirk for Leith was South Leith Parish Church, originally constructed in 1483. In June 1811 a statistical population census gave the population of South Leith as 15,938; North Leith 4875. With a procession and ceremony, the foundation stone of the new church for the parish of North Leith was laid on 11 April 1814.[2]

The earliest evidence of settlement in Leith comes from the several archaeological digs executed in the Leith area in the late 20th century. Amongst the finds were wharf edges were revealed, dating from the 12th century. 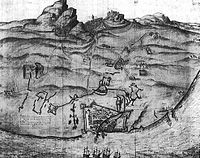 Mary of Guise ruled Scotland from Leith in 1560 as Regent for her daughter, Mary, Queen of Scots. In that year the Scottish Court had removed to Leith, on what is now Parliament street, off Coalhill. Mary of Guise also moved her palace from the Castlehill in Edinburgh to Leith. This was situated on what is now Quality Lane. Artifacts from the demolished palace are held in the National Museum of Antiquities. This consolidation was linked to the large French garrison stationed in Leith, and the strong Catholic sympathies there.

Leith was besieged by the forces of Queen Elizabeth I in 1560. The most well documented day of the siege was 7 May 1560, when the English charged the walls of Leith with ladders that were far too short. John Knox records the delight of Mary of Guise, and English sources reveal 1000 casualties.[3]

The Siege of Leith ended in June 1560 with the departure of the French Catholic troops after the death of Mary of Guise. Remnants from the siege include a man-made mound called "Giant's Brae" on the local park, Leith Links, which was used as a cannon emplacement, being elevated to fire over the town wall. Other gun emplacements in the siege were at Leith Mount, at the north end of Ferry Road, and at the north end of Bangor Road.

Late in 1561, Mary, Queen of Scots, arrived in Leith and after a brief stop at the "house of Andro Lamb..beit the space of ane hour" she travelled by coach to Holyrood Palace, to begin her ill-fated six-year reign.

A century later, Leith was both a battleground and ultimately headquarters for Oliver Cromwell's forces, under the command of General Monck. An archway of the old Leith Citadel, dating from 1656, stands on Dock Street as the only remnant of extensive Cromwellian fortifications which stood in this area.

During the American War of Independence the Scottish-born John Paul Jones, who is credited as founder of the American Navy, in 1778 led a flotilla of three former French vessels against Ireland and the west coast of Scotland. There is no evidence of any of the American ships ever reaching the east coast of Scotland but the defences of Leith Fort were built in 1780, as much in response to threats from France and Spain. The fortress was designed by James Craig, architect of the Edinburgh New Town, and was similar in scale and design to Fort George near Inverness. A fine Georgian terrace to the north-east served as officers' quarters, and was known as "London Row" because it was brick-built and looked like a London terrace, rather than Edinburgh.

Leith Fort was in active use until 1955, latterly serving for National Service training. Most of the fortress was demolished to build the present Council housing scheme which is centred around Fort House, and enclosed by the old fortress walls. A pair of gatehouses survive at the southern entrance to the site.

The earliest documented mention of golf refers to Leith Links. The Town Council, at the request of King James II, banned "gauf" (golf) and "fussball" (football) in 1457 to stop these distractions from archery practice for military purposes.[4] Leith Links hosted golf again in 1714 with the first competition for "The Edinburgh Arrow" by the Royal Company of Archers. The links are the site of an early five hole golf course built in the 18th century. Leith bolsters its claim to being "the home of golf" because the official rules of golf, initially formulated at Leith in 1744 by the Honourable Company of Edinburgh Golfers, were later adopted by Royal and Ancient Golf Club of St Andrews. The only difference introduced with those rules (which remain the rules of golf) was the omission of one rule to do with hazards such as trenches. Leith Links also has one of the longest established cricket pitches in Scotland, laid down in 1820.

Leith was the port of entry for the visit of King George IV to Scotland, and The Old Ship Hotel and King's Landing was then given its new name, to mark the King's arrival by ship's boat at Leith Shore for this event, which is remembered most for popularising and decriminalising symbols of Scottish national identity.

Leith Docks became known as the port for Edinburgh and modest shipbuilding and repair facilities grew. On 20 May 1806, there was a procession of the Lord Provost of Edinburgh, Magistrates (Baillies), and Council, along with a numerous company of ladies and gentleman, for the opening of the first new Wet Dock, the first of its kind in North Britain. The Fife packet called The Buccleuch was the first to enter the dock, with the civic dignitaries on board, amid discharges of artillery from the Fort and His Majesty's warships in the Roads. The foundation stone for the second (middle) wet dock was laid on 14 March 1811, which was completed and opened with due ceremony in 1817 by Lord Provost Arbuthnot. The same year the Trinity House in Kirkgate was erected in Grecian architectural style at an expense of £2500.[5]

The twentieth century and beyond

Continued growth meant that Leith and Edinburgh formed a contiguous urban area. Leith was merged with Edinburgh in 1920 despite a plebiscite in which the people of Leith voted 26,810 to 4,340 against the merger. The docks at Leith underwent severe decline after the Second World War and the area gained a reputation for roughness and prostitution. In recent years Leith has undergone significant regeneration and is now a busy port with visits from cruise liners and the home of the Royal Yacht Britannia, Ocean Terminal, and administrative offices for several departments of the Scottish Executive. The council and government's 'Leith Project' provided a further economic boost. The shore area of Leith, once seedy, is now a centre for a range of new pubs and restaurants in charming surroundings.

Leith is no longer a place of depressed slums. After decades of industrial decline, slum clearance and resultant depopulation in the post-war era, Leith gradually began to enjoy an upturn in fortunes in the late 1980s. Several old industrial sites were developed with modest, affordable housing, while small industrial business units were constructed at Swanfield, Bonnington, Seafield and off Lindsay Road. The Shore developed a clutch of upmarket restaurants, including the second of the groundbreaking chain of Malmaison hotels in a conversion of the former "Angel Hotel", a seamans' mission, whilst the once industrially-polluted and desolate banks of the Water of Leith were cleaned up and a public walkway opened. 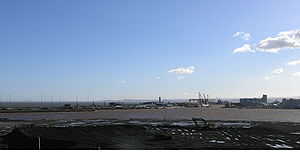 In 2004 the owner of the Docks, Forth Ports, announced plans to close the port and carry a major redevelopment of the area out.[6] The planned development, which was given supplementary planning guidance by the City of Edinburgh Council in 2004, will be the size of a small town with up to 17,000 new homes.[7] It will include the filling in of the Western Harbour for development as well as residential, leisure, retail and commercial development across the rest of the old docks. The urban design of the project will keep it in context with the older developments in Leith and provide a wealth of public and private open space, including two large parks and a number of pedestrian linkages across the docks. The whole project is expected to be completed by about 2020.