Kirknewton is a village and parish in Midlothian; a place of about 2,200 people in the village and its environs, and over 7,200 in the wider parish. It sits in the west of the county, south of the A71 Edinburgh to Livingston road, and north of the A70, the high-level road that runs along the north side of the Pentland Hills from Edinburgh to Carnwath and Lanark. Much of the village stands back from the B7031, which links the two main "A" roads.

Kirknewton's Main Street has a very enclosed feel. Stretching from the junction with the B7031 to the old kirkyard in the centre of the village, it consists of a collection of one and two storey buildings. The parish church, dating from 1750, stands in the midst of the kirkyard. It was remodelled in the Gothic style in 1872 by Brown& Wardrop.[1] The manse retains its 1750 architecture. The kirkyard itself is home to a number of headstones dating back to the 18th century, and a burial enclosure for the Campbell Maconachies of Meadowbank House that dates back to 1662.

The other burial enclosure was constructed by the Royal Society of Physicians as a memorial for an important founding member, William Cullen (d.1790). Professor Cullen was a significant figure in 18th century medicine, chemistry, agriculture and practised the application of science to agriculture at a nearby farm acquired by him in the 1870s.[2] 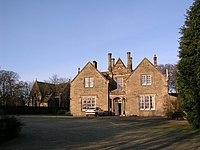 the Manse and Kirk at Kirknewton

The earliest signs of settlement in the area are the remains of Iron Age forts on Kaimes Hill and Dalmahoy Hill; adjoining craggy summits about a mile east of Kirknewton.

In more recent times, Kirknewton House, which lies just to the south of the village, had its origins (as Meadowbank House) in the 17th century. The current house is a reworking of the original by the architect William Playfair for Alexander Maconochie, Lord Meadowbank in 1835. Kirknewton House is screened by trees from nearby roads and from the village itself. The most obvious evidence of its existence is the entrance lodge beside the start of the drive to the house at the south end of the village.

Kirknewton stood at the south eastern corner of the large area of West Lothian which was transformed from the 1860s by the oil shale industry, with the nearest shale mine lying just to the north west of the village, between it and East Calder. Shale from here was taken to the huge oil shale works at Pumpherston for processing.

During Second World War, the Royal Air Force built a military airfield at Whitemoss, a mile south east of Kirknewton. RAF Kirknewton, as it was known, was home to a variety of units during the war and, like many other military airfields, fell quiet afterwards. In 1952 it became home to a number of small United States Air Force units tasked with providing mobile radio facilities to the USAF in Britain. The USAF left in 1966, and today Kirknewton airfield is home to an RAF(V) Gliding Unit, 661(RAF Kirknewton)VGS.