From Wikishire
(Redirected from Severn)
Jump to: navigation, search 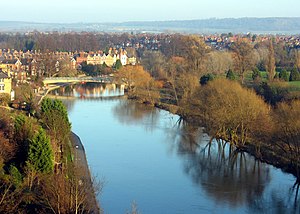 The Severn at Shrewsbury 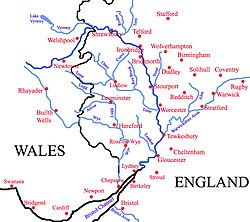 Tributaries (light blue) and major settlements on and near the Severn

The River Severn is the longest river in Great Britain, at about 220 miles. It rises on Plynlimon in the heart of the Cambrian Mountains and flows in a vast arc out to carve a broad estuary in Gloucestershire and between Somerset and Monmouthshire which becomes the Bristol Channel.

The source of the Severn on Plynlimon is at an altitude of 2,000 feet near Llanidloes, Montgomeryshire. The river flows out through the Hafren Forest and all through Montgomeryshire, through Shropshire, Staffordshire, Worcestershire and Gloucestershire. At Upper Arley the Severn briefly forms the border between Staffordshire and Shropshire; then cuts the parish into two pieces, before forming Staffordshire's border with Worcestershire. Four county towns stand on its banks: Montgomery, Shrewsbury, Worcester, and Gloucester. With an average discharge of 23,500 gallons/s at Apperley, Gloucestershire, the Severn is the greatest river in terms of water flow in the United Kingdom.

The river is known in Welsh as the Hafren. The Romans called it Sabrina, and in Old English it was the Sæfern.

The Latin name Sabrina is thought to derive from a Celtic original name of uncertain meaning.[1] From that original name derive all the others. A folk etymology later developed, deriving the name from a mythical story of a nymph, Sabrina, who drowned in the river.[2] Sabrina is also the goddess of the River Severn in Ancient British mythology, and this is invoked in John Milton's Comus, a masque first performed at Ludlow Castle.[3] There is a statue of 'Sabrina' in the Dingle Gardens at the Quarry, Shrewsbury. As the Severn becomes tidal the associated deity changed to Noadu (Romanized as Nodens), who was represented mounted on a seahorse riding on the crest of the bore.[4] 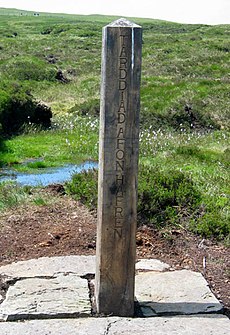 The source of the Severn on Plynlimon

The port of Bristol is located on the Severn Estuary, where another River Avon discharges into it through the Avon Gorge.

The River Usk flows into the Severn Estuary just south of Newport. 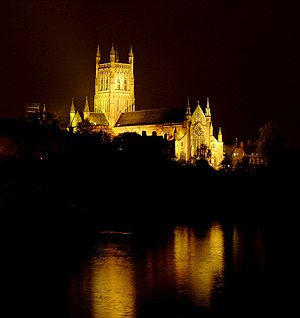 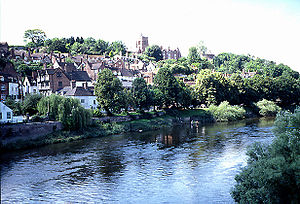 Below is a list of major towns and cities that the Severn flows through (in order running downstream): 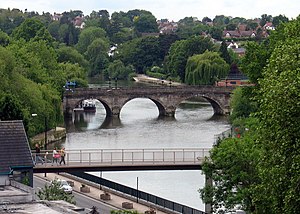 The Welsh Bridge (background) and Frankwell Footbridge (foreground) in Shrewsbury

The Severn is bridged at many places, and many of these bridges are notable in their own right. Several were designed and built by the engineer Thomas Telford. There also is the famous Iron Bridge at Ironbridge, which was the world's first iron arch bridge.

The two bridges of the Severn bearing the motorways that link Gloucestershire and Monmouthshire and are among the most important in Britain.

Before the construction of the first bridge in 1966, the channel was crossed by the Aust Ferry.

Cars could also be transported through the Severn Tunnel. In the 1950s three trains a day made round trips between Severn Tunnel Junction and Pilning. The vehicles were loaded onto open flat bed carriages and pulled by a small pannier tank locomotive although sometimes they were joined to a scheduled passenger train. The prudent owner paid to cover the vehicle with a sheet as sparks often flew when the steam locomotive tackled the grade leading to the tunnel exit. A rail coach was provided for passengers and drivers. Reservations could be made and the fee for the car was about thirty shillings in the early 1950s.

There is a public right of navigation between Pool Quay, near Welshpool, and Stourport. However this stretch of the river has little traffic, other than small pleasure boats, canoes and some tour boats in Shrewsbury. Below Stourport, where the river is more navigable for larger craft, users must obtain permits from British Waterways, who are the navigation authority.

In the tidal section of the river below Gloucester, the Gloucester Harbour Trustees are the competent harbour authority.

There are locks on the lower Severn to enable sea going boats to reach as far as Stourport. The most northerly lock is at Lincombe, about a mile downstream from Stourport.

The Staffordshire and Worcestershire Canal, the Worcester and Birmingham Canal, (both narrow beam) and the Herefordshire and Gloucestershire Canal all join the Severn at Stourport, Worcester and Gloucester respectively. The Droitwich Barge Canal, a broad beam canal joins the Severn at Hawford, near to the River Salwarpe, and connects to the Droitwich Canal (narrow beam) in the name town, which then forms a link to the Worcester and Birmingham Canal. The two Droitwich canals are due to re-open in 2010 after major restoration.

The Lydney Canal is a short canal which connects Lydney to the river.

Paddle steamers were operated in the Severn Estuary from the mid 19th century to the late 1970s by P and A Campbell of Bristol. Since 1986 Waverley Excursions has operated occasional sailings to Sharpness and Lydney by the MV Balmoral.[6]

A number of ferries were also operated on the tidal river, for example at New Passage, Purton and Arlingham. The last ferry was the Aust Ferry, which closed in 1966 when the Severn Bridge opened. One of the Aust ferries, Severn Princess, is still in Chepstow although largely derelict.

In Worcester, the Worcester River Cruises have boat trips up and down the river between Tewkesbury and Stourport, operating the boats The Pride of the Midlands and The Earl Grosvenor.[7]

In Shrewsbury, boat trips around the loop of the town centre are at present provided by the Sabrina and depart from Victoria Quay near the Welsh Bridge during the summer.[8] 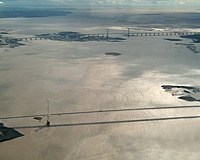 The Severn bridges crossing near the mouth of the River Severn

The river becomes tidal at Maisemore, on the West Channel just north of Gloucester, and at Llanthony Weir on the East Channel. The tidal river downstream from Gloucester is sometimes referred to as the Severn Estuary, but the river is usually considered to become the Severn Estuary after the Second Severn Crossing near Severn Beach, Gloucestershire (the point to which the jurisdiction of the Gloucester Harbour Trustees extends), or at Aust, the site of the Severn Bridge.

The estuary is about 2 miles wide at Aust, and about 9 miles wide between Cardiff and Weston-super-Mare.

Until Tudor times the Bristol Channel was known as the Severn Sea, and it is still known as this in Welsh: Mor Hafren. 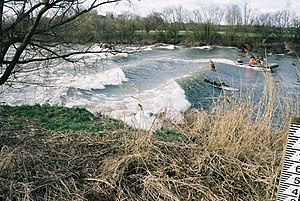 The Bore near Over Bridge

A curious phenomenon associated with the lower reaches of the Severn is the tidal bore,[9] which forms somewhat upstream of the port of Sharpness. The Bore is a tidal wave which forms as the tide rushes into the river: the Bore can run as far up the Severn as Maisemore, upstream of Gloucester.

Nennius in the ninth century wrote of the Wonders of Britain "Another wonder is Dau Ri Hafren, that is, the Two Kings of the Severn. When the sea floods into the Severn estuary, two heaped-up wave crests are built up separately, and fight each other like rams. One goes against the other, and they clash in turn, and then one withdraws from the other and they go forth together again at each tide. This they have done, from the beginning of the world to the present day."

The Bore is a creature of the tide. The Severn Estuary has the largest tidal range in the British Isles, about 49 feet, which is exceeded only by the Bay of Fundy in Nova Scotia. During the highest tides, the rising water is funnelled up the estuary into a wave that travels rapidly upstream against the river current. The largest bores occur in spring, but smaller ones can be seen throughout the year. The Environment Agency publishes timetables and predictions of bore heights on its website.

Being the onset of the flood tide, the Bore is accompanied by a rapid rise in water level which continues for about one and a half hours after the bore has passed. The Severn bore is not a self-reinforcing solitary wave or soliton, but rather a shock wave which is formed because the wave is travelling faster than the wave speed in water above the Bore. The largest recorded bore was on 15 October 1966, when it reached a height of 9.2 feet.

The Bore is best seen at Stonebench, near Elmore, on the east bank, or at Minsterworth on the west bank. It can also be seen at Over Bridge.

Many hold that the bore is best viewed and heard at night when there is less chance of powerboats disrupting it or running before it, their engines drowning the sound and their wakes diminishing the purity of the spectacle of a single wave rapidly advancing up a smooth river.

The largest bores occur in spring, but smaller ones can be seen throughout the year. The bore is accompanied by a rapid rise in water level which continues for about one and a half hours after the bore has passed.

A 3-mile stretch of the River Severn in Shropshire, is known as Ironbridge Gorge. It was designated a World Heritage Site by UNESCO in 1986. Its historic importance is due to its role as the centre of the iron industry in the early stages of the Industrial Revolution. The gorge and the village of Ironbridge get their name from the Iron Bridge across the Severn, built in 1779, which was the first cast-iron arch bridge ever constructed.[10]

The sides of the estuary are also important feeding grounds for waders, notably at the Bridgwater Bay National Nature Reserve and the Slimbridge Wildfowl Trust.

The River Severn is a constant theme of literature. It is named several times in AE Housman's collection of poems A Shropshire Lad (1896), for example in 1887:

"It dawns in Asia, tombstones show
And Shropshire names are read;
And the Nile spills his overflow
Beside the Severn’s dead”

In William Shakespeare's "Henry IV, Part 1," Henry Hotspur Percy recalls the valour of Edmund Mortimer, 5th Earl of March in a long battle against Welshman Owain Glyndŵr upon The Severn's banks, claiming the flooding Severn "affrighted with (the warriors') bloody looks ran fearfully among the trembling reeds and hid his crisp head in the hollow bank, bloodstained with these valiant combatants."