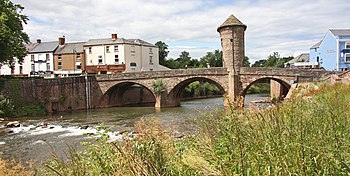 The River Monnow (Welsh: Afon Mynwy) is a gentle river which forms the border between Herefordshire and Monmouthshire, giving its name to the latter's county town and thus to the county. At Monmouth it enters the River Wye.

The Monnow rises near Craswall on Cefn Hill just below the high Black Mountains. It flows southwards, swallowing the waters of its tributaries the Escley Brook and Olchon Brook near Clodock and the waters of Honddu, coming out of the Brecknockshire mountains, near Pandy. The river then flows briefly eastwards before again turning southwards. At Monmouth the river joins into the River Wye with the River Trothy. Its total length is around 26 miles.

For much of its short length the Monnow marks the border between Herefordshire and Monmouthshire before it joins the River Wye at Monmouth, below which the swollen River Wye assumes the office of marking the county border.

The Monnow is bridged at Monmouth by the unique mediæval Monnow Bridge. The Monnow Valley Walk follows the river.

At one time the river was noted for its great number of brown trout; the reach from Pontrilas to Skenfrith produced record catches. Numbers fell substantially during the 20th century and especially after the 1960s but in more recent years the trout fishing has improved dramatically and the Monnow catchment once again ranks as one of the best wild trout fisheries in England and Wales

The Monnow is now also noted for the grayling fishing. A recently opened fish pass at Monmouth allows migratory fish to by-pass a previously impassable weir, and has once more given salmon and sea trout access to the majority of the catchment; salmon were seen jumping at Kentchurch weir for the first time for many years in the Autumn of 2008. The Monnow Fisheries Association takes a large amount of the credit for the improvement in the fishing through their work on habitat improvement throughout the catchment and encouraging anglers to return a high proportion of fish caught safely to the water.