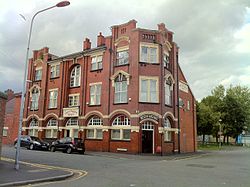 Pillgwenlly is an inner-city suburb of Newport, Monmouthshire consisting of the city's Docklands. The name is often shortened to simply Pill. It may come from Pwll, the Welsh-language word for a water inlet, harbour or pool, and 'Gwenlly', a corruption of the name of Saint Gwynllyw, the name meaning Gwynllyw's harbour. Supposedly it derives from the period when Gwynllyw was a pirate and he based his ships in this area.[2]

Pill is known for its close-knit community spirit and for its ethnic diversity. Pill has most of the residents of foreign descent within the city, due largely to the location of the Old Town Docks, where a large influx of immigrants came to work. The streets of Pill also host the annual Pill Carnival, on the last weekend of August. The Old Town Dock area is currently undergoing a huge mixed-use regeneration to bring the derelict docklands back into use. A lively market takes place on a Saturday morning at the Newport Auctions site.

Portland Street in Pill was the birthplace, in 1871, of the famous "Tramp Poet" W. H. Davies and the nearby Church House Inn, where he was brought up by his grandparents, has a commemorative blue plaque.

The opening line 'Libraries gave us power' of the 1996 song A Design for Life, by Blackwood band Manic Street Preachers, was inspired by the legend above the entrance to the former Carnegie Library.

In 2012 the TV drama series Being Human featured internal and external cafe scenes filmed in Pill near the Transporter Bridge.

Pill Harriers RFC is a successful rugby union team whose membership was historically made up from the local dock workers. In its past it supplied many players to both Newport and Wales. Tony Pulis, former Newport County player and Premier League manager, was born in Pill.