Llangwm is a small village and ancient parish in Monmouthshire, three miles east of Usk, on the B4235 Chepstow to Usk road. The main village is at Llangwm Uchaf ("Upper Llangwm"), with a smaller and more dispersed settlement about a mile to the north-east at Llangwm Isaf ("Lower Llangwm").

The village has two parish churches in the Church in Wales: St Jerome in Llangwm Uchaf and St John in Llangwm Isaf.

Llangwm Uchaf is best known for its partly 13th-century church dedicated to St Jerome. It is built in the Early English style and was partly rebuilt in the 1860s. An ornamented stoup was found built into the wall during restoration work. There are three carved "green men" with foliage issuing from their mouths on the chancel arch. The church also contains a mediæval rood screen of circa 1500, restored in the 19th century, which has been described as "a breathtaking sight, rising almost to the roof"[1] and "one of the most spectacular rood screens in south Wales".[2] It has been suggested that the village's remoteness saved the screen from destruction by Puritans.[3]

Buried in the chancel of the church, though no memorial to him survives, is Walter Cradock, the 17th-century cleric, who was born at Trefela, 1½ miles south of the church.[2] He was inspired to become an Independent by fellow church Dissenter William Wroth.

The parish has a second smaller and even more remote church, that of St John at Llangwm Isaf, again in the Early English style and restored in the 19th century.[1]

The Iron Age hill fort at Gaer Fawr ("great fort"), about a mile south-east of Llangwm Uchaf, is one of the largest hill forts in Monmouthshire, and commands wide views over the Vale of Usk to the west, north and east.[1][3] 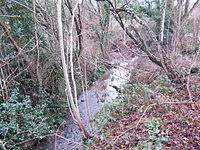