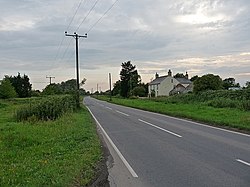 Wentlooge or Wentloog, is a civil community comprising the greater part of the Wentloog Level in south-west Monmouthshire. The name Wentlooge is a corruption of the earlier name Gwynllŵg, said to have been named after Gwynllyw, its 5th - 6th century ruler.

The community is bounded by the Pencoed reen to the north-west, the Ebbw River to the north-east, the Bristol Channel to the south-east and the Great Western Main Line to the south-west. It contains the hamlets of St Brides Wentlooge and Peterstone Wentlooge. It had a population of 737 at the 2011 census.

This Monmouthshire article is a stub: help to improve Wikishire by building it up.
Retrieved from "https://wikishire.co.uk/w/index.php?title=Wentlooge&oldid=69843"
Categories: