The Black Mountains may be defined roughly as those hills contained within a triangle defined by the towns of Abergavenny in the south-east, Hay-on-Wye in the north and the village of Llangors in the west. Talgarth below the northern slopes is town popular with walkers exploring the Black Mountains. 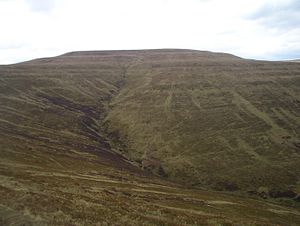 The easternmost part of the Black Mountains is the Hatterrall Ridge, which defines the border between the county of Hereford and those of Brecon and Monmouth. The summit of this ridge (at 52°-0’32"N, 3°5’8"W) is known as the Black Mountain, which reaches 2,306 feet and is Herefordshire's county top; the highest point in the county. 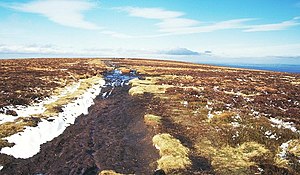 The summit of the Black Mountain

The Skirrid above Abergavenny is also called "Skyrrid", or "Ysgyryd Fawr" or "Holy Mountain".

See this layered sandstone among the short mountain grass. Place your right hand on it, palm downwards. See where the sun rises and where it stands at noon. Direct your middle finger midway between them. Spread your fingers, not widely. You now hold this place in your hand - the six rivers rise on the plateau on the back of your hand. The first river now called Mynwy or Monnow flows at the outside edge of your thumb. The second river now called Olchon flows between your thumb and the first finger to join the Mynwy at the top of your thumb. The third river now called Honddu flows between your first and second fingers and then curves to join the Mynwy away from your hand. The fourth river now called Grwyne Fawr flows between your second and third fingers and then curves the other way joining the fifth river now called Grwyne Fechan that has been flowing between your third and your little finger. The sixth river now called Rhiangoll flows at the outside edge of your little finger. Beyond your hand are the two rivers to the sea ; Mynwy carrying Olchon and Honddu flows into the circling Wye. Grwyne and Rhiangoll flow into the Usk. Wye and Usk separated by the forest of Gwent flow into the Severn Sea. The ridges of your five fingers and the plateau of the back of your hand are now called the Black Mountains. Your thumb is Crin y Gath or the Cats Back. Your first finger is Hatterall Hill. Your second finger is Ffawyddog with Bal Mawr at the knuckle. Your third finger is Gader with Gader Fawr at the knuckle. Your little finger is Allt Mawr and its nail is Crug Hywel giving its name to Crickhowell below it. On the back of your hand are Twyn y Llech and Twmpa and Rhos Dirion and Waun Fach. Mynwy and Olchon flow from Twyn y Llech. Honddu flows from Twyn y Llech and Twmpa. Grwyne Fawr flows from Rhos Dirion. Grwyne Fechan and Rhiangoll flow from Waun Fach. You hold the shapes in the names in your hand.

The Black Mountains are composed almost exclusively of rocks assigned to the Old Red Sandstone and dating from the Devonian period. This thick sedimentary sequence comprises sandstones, mudstones, siltstones and numerous thin limestones. The exception is the summit area of Pen Cerrig-calch where a thin sequence of carboniferous rocks occur, an outlier of the more extensive outcrop to the south of the Usk valley. The lower slopes of these hills are formed from the mudstone-rich St Maughans beds at the top of which lies a calcrete - a discontinuous limestone band known as the Ffynnon Limestone. Above this are the sandstone-dominated Senni Beds which form the upper reaches of much of the range. Higher again are the Brownstones which form the summit areas of the central and southern parts of the range.

The Old Red Sandstone extends back into the late Silurian period and forward into the earliest part of the Carboniferous period. The body of rock, or facies, is dominated by alluvial sediments and conglomerates at its base, and progresses to a combination of dunes, lakes and river sediments. The familiar red colour of these rocks arises from the presence of iron oxide but not all the Old Red Sandstone is red or sandstone: the sequence also includes conglomerates, mudstones, siltstones and thin limestones and colours can range from grey and green through red to purple. 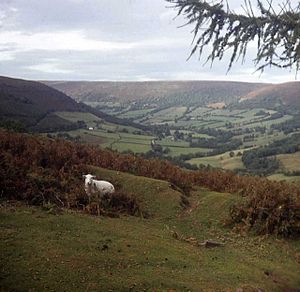 View up the Vale of Ewyas

The area lay at the margins of the British ice-sheet during the ice ages; these hills were shaped by ice from a source in mid-Wales rather than generating any major glaciers of their own. Non-local rock fragments within the glacial till show that Wye valley ice penetrated the Rhiangoll valley from the north, moving over the low col at Pengenffordd. No such evidence has been found in the Vale of Ewyas, though the profile of this valley strongly suggests the presence of a major glacier.

The valleys of the Grwyne Fawr and Grwyne Fechan were probably ice-free during the last ice age. One result of the over-steepening of valley sides by glacial action is the suite of landslips affecting the range, notably in the Vale of Ewyas. The most impressive of all is that at Darren and Cwmyoy. Another impressive set of landslip forms can be seen at Black Darren and Red Darren ('Darren' signifies 'edge' in Welsh) on the eastern side of the Hatterrall ridge west of Longtown.

Scattered around the range are innumerable small quarries, virtually all of which now lie abandoned, once a source of walling and roofing stone for local use. In places the thin Devonian limestones were worked to feed limekilns for the manufacture of lime for agricultural use and in buildings.[1] Old Red Sandstone has also frequently been used in buildings in Herefordshire, Monmouthshire and Brecknockshire.

Things to do in the Black Mountains

The area is popular for hill-walking, mountain-biking and horse riding. The Offa's Dyke long-distance footpath runs along the Hatterall ridge towards Hay, whilst both the Beacons Way and the Marches Way also pass through the Black Mountains. The range's great northern escarpment offers excellent conditions for gliding, hang gliding and paragliding as winds are forced up and over the hills.

The market town of Hay-on-Wye on the northern edge is a national centre for the second-hand book trade, and therefore of interest to the more celebral ramblers. 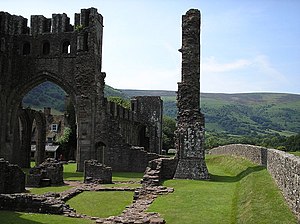 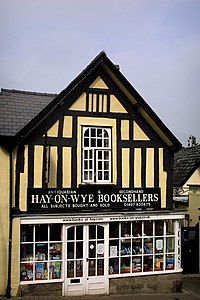 There are several attractive villages and hamlets in this area. The Skirrid Mountain Inn also has a wider reputation, being claimed as the oldest public house in Wales, mentioned in records from 1100.

Ancient ruins include Llanthony Priory in the Vale of Ewyas, Craswall Priory, and Castell Dinas, an 11th- to 13th-century castle built on the site of an Iron Age hillfort between Talgarth and Crickhowell.

Sites of interest include Tretower Castle, Tretower Court, the Iron Age hill fort of Crug Hywel, and the remains of Cwmyoy and Partrishow churches.

The book-town Hay-on-Wye lies just to the north. It was the first booktown to be established and there are about a dozen second-hand bookshops for browsers and treasure-seekers to explore.

Towns and villages around the Black Mountains include:

Each village provides a base for exploring the hills all year round.

Books set in or around the Black Mountains include: