Ebbw Vale is a town in north-western Monmouthshire. It lies at the head of the valley formed by the Ebbw Fawr tributary of the Ebbw River. The Ebbw Vale and Brynmawr conurbation has a population of roughly 33,000.

Originally a rather insignificant spot in rural Monmouthshire with only about 140 inhabitants at the end of the 18th century, Ebbw Vale—and the whole valley—was transformed [1] by the Industrial Revolution. The Ebbw Vale Iron Works, later to become the Ebbw Steel works, opened in 1778, followed by the opening of a number of coal mines around 1790. At its height (1930s–40s) the steel works in Ebbw Vale was the largest in Europe, attracting attention from German bombers during World War II. However the deep valley proved difficult to bomb and the plant survived. Ebbw Vale suffered from the decline[2] of the steel and coal industries and there are now no steelworks or mines left in or around the town. In 2003 work began on demolishing the long-standing steelworks, and currently around one to two miles of the valley stands empty awaiting development.

Aneurin Bevan, the "father" of the National Health Service, represented Ebbw Vale as a Labour Party Member of Parliament from the 1929 general election. When he died in 1960, he was succeeded as MP by Michael Foot.

The Ebbw Vale conurbation today is a result of areas which grew during the Industrial Revolution as a result of the iron industry, local ironworks or have developed as a result of distinct housing areas to serve local industry with workers, they include: Ebbw Vale, Rassau, Garnlydan, Hill Top, Briery Hill, Glyncoed, Willowtown, Glanyrafon, Cwm, Newtown, Victoria, Tyllwyn, Waunlwyd and Ebbw Vale itself. In particular Beaufort and Victoria were the two original iron-producing areas. 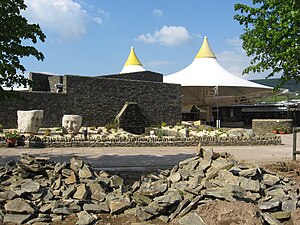 In 1992 the Ebbw Vale Garden Festival was the last National Garden Festival. It was sited on the south side of the recently demolished steel works. The festival ran for five months between 1 May to 4 October 1992 having attracted over 2 million visitors. The development cost around £18 million. Since the festival the site has been renamed Festival Park and has slowly become dilapidated over 16 years due to lack of care and attention.[3] It is now the site of the Festival Park Branded Outlet, a retail outlet comprising approximately forty shops.

Sport features as one of the many reasons for pride in the Ebbw Vale area, including a top-flight Welsh Premiership rugby union team, Ebbw Vale Rugby Football Club. The team is nicknamed 'The Steelmen' named after the steelworks in the town.

In 1907 Ebbw Vale RFC switched to professional rugby league, becoming Ebbw Vale RLFC. It was the first rugby league club in Wales and the team won the Welsh League in 1909 and 1910.

Also in the town there is a keen interest in cricket (of which the town hosted several Glamorgan County Cricket fixtures until 1996), bowls, swimming, and a large host of football and rugby teams at varying levels. Eugene Cross Park is the home of both the town's rugby and cricket clubs. However, cricket predates rugby and Ebbw Vale's first recorded match was played against Blaina as far back as 1852. During the 19th century the influx of people from the surrounding counties looking for work in the local ironworks and coal mines gave cricket a boost and in June 1879 "a meeting was held at the Institute to form a cricket club in the town".

In addition to the above the town also has a leisure centre which hosts facilities ranging from a gym, sauna, weights room, indoor 5-a-side football pitches, squash courts and a 108 ft-long, 13 ft-deep swimming pool with diving boards.

A railway service to Cardiff Central began on 6 February 2008,[4][5] with trains serving the town from the new Ebbw Vale Parkway railway station. A second service to Newport High Street and extension to Ebbw Vale Town is scheduled to begin in 2014.