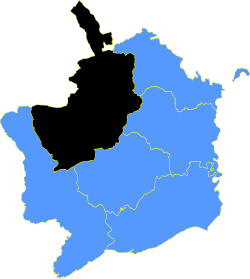 Abergavenny is a hundred of Monmouthshire, named after the town of Abergavenny, which it contains.

It is situated in the northern part of the county, bounded on the north by Herefordshire; on the east by the hundreds of Skenfrith, Raglan, and Usk; on the south by Wentloog hundred; and on the west by Wentloog and Brecknockshire.

The hundred comprises a highly diversified tract of country where hills, valleys, rivers and streams display an endless variety of features. To the north it shares the verdant landscape with that of Herefordshire whereas on the west it takes on the abrupt character of the rugged district of southern Brecknockshire. To the south and south-west it comprises a portion of the former mining country. This hundred is watered by the rivers Monnow, Usk and Gavenny with numerous minor streams. It is the third-most populous of Monmouthshire's hundreds, with a population of 82,587.