Brynmawr, sometimes hyphenated to Bryn-mawr, is a market town in Brecknockshire. Its name means "big hill".

The town is sometimes cited as the highest town in Wales, and stands at 1,250 to 1,500 feet above sea level, at the head of the South Wales Valleys. It grew during the arrival of the coal mining and iron industries in the early 19th century.

Here originally stood a small village called Gwaun Helygen (Cors Helygen in Modern Welsh, meaning "Marsh of the Willow"). With the expansion of the Nantyglo Ironworks housing was required for the workers and Brynmawr turned into a prosperous town. Although coal mining has declined, a large mining museum has been established nearby at Big Pit.

Until 1957 there was a railway station, which had been opened a hundred years before by the London and North Western Railway.

The town centre's primary shopping areas are contained within Beaufort Street and on Market Square which is also the focal point of the town where many events are hosted. The former Market Hall is now a cinema and theatre presenting films and productions from the local amateur operatic society. The business community offers many traditional, family-orientated and independently run shops with a friendly and personal service.

Parc Nant y Waun is a nature reserve incorporating 54 acres of grassland, mires and reservoirs which was officially opened in 2007.[1] Home to a many wildlife species, it includes a picnic area, an outdoor classroom, and an angling club.[2] 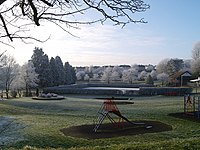 Heavy frost at the park

Brynmawr has a 350-seat cinema (The Market Hall Cinema) which is the longest continually running cinema in Wales. The Market Hall opened in 1893 and has recently been renovated.