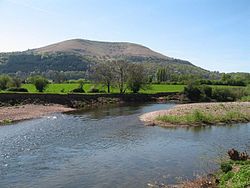 The River Usk near Abergavenny

The River Usk (Welsh: Afon Wysg) flows through the heart of Monmouthshire to the sea.

The Usk rises on the northern slopes of the Black Mountain in Brecknockshire, in the westernmost part of the Brecon Beacons National Park, and enters the Severn estuary at Newport.

The river's uppermost stream runs north to be swallowed in the Usk Reservoir, from which it flows east by Sennybridge to Brecon. From Brecon, the Usk turns southeast and on the River's course here are found such towns as Talybont-on-Usk, Crickhowell before entering Monmouthshire above Gilwern, briefly flirting with the boundary and receiving the waters of the Grwyne, and then flowing on south-eastwards to Abergavenny.

The beautiful town of Usk, named for the fair river it graces, stands on the course of the Usk in the midst of the county. Below the town, the river passes the Roman legionary fortress of Caerleon, also known as Caerleon-on-Usk, before flowing through the heart of Newport and opening its mouth to disgorge itself into the Severn Estuary at Uskmouth, beyond Newport.

The normal tidal limit of the river is the bridge at Newbridge-on-Usk, some five miles above Newport.

The Usk Valley is green and bountiful, its meanders between the hills of Monmouthshire flanked by farmland and woodland.

The whole river has been designated a "Site of Special Scientific Interest". At its mouth it contains estuary with mudflats and salt marsh, lagoons, at on its course through Monmouthshire it has bog and marsh, varied grassland and woodland habitats. A great diversity of plants and animal life dwell in and along the Usk. Its fish include salmon, trout, twaite, shad, lampreys, perch, sea trout, chub, dace and roach. Otters swim here and kingfishers, herons and other wildfowl inhabit its banks. Dippers and red kites can be seen upriver.

The Usk has long been a noted salmon and trout fishing river. Salmon of over 30 lb can still be caught. The river has the highest estimated salmon egg deposition of any river south of Cumberland, and exceeded its spawning target. The river has recently been rated as one of the Britain's best fly-fishing waters for salmon.

The Usk bears an ancient name. It is one of the many rivers across Britain to bear the name Esk or a variant upon it. The Roman name of Caerleon, Isca, reflects that of the river in perhaps an older form. In the Welsh language today it is the Wysg.

Seamus Heaney in the introduction to his translation of Beowulf[1], suggests an origin of the name Usk, from the Scottish and Irish Gaelic word "uisce", which today is more familiar as "whisky" but which means in Gaelic just "water". He is right to see a connection, but if not Gaelic, it is from some lost common Celtic root which has given us the many "Esk" names still found on the landscape from Angus to Devon. 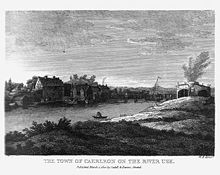 A view of Caerleon and the Usk

The River Usk has played an important role both in the history of Monmouthshire, and features in some local folk-tales.

The tidal reaches of the Usk have been used as a major shipping port for much of the last millennium, the river's broad, deep mouth given good, sheltered, navigable access to the Severn estuary and the Bristol Channel and thence to home waters and further overseas.

Evidence of the Usk's long-standing use in transport and trade came in the form of the remains of the Newport ship which were unearthed in July 2002. The mediæval ship, dated to around 1465, was most likely a trading ship, and may have sailed around much of Europe and beyond in its lifetime. Its presence in the Usk has confirmed what an important trading route the Usk must have provided to the many towns and villages along its route.

The Usk has also played a role in many local legends. The Mediæval Latin text The Rise of Gawain, Nephew of Arthur spins a humorous tale in which an incognito Gawain pushes his uncle King Arthur into the Usk, who is then forced to explain to his wife Gwendoloena (Guinevere) why he is so wet.[2]

Geoffrey of Monmouth, the mediæval "historian" or mythmaker, writes of Caerleon in the mid 12th century:

For it was located in a delightful spot in Glamorgan, on the River Usk, not far from the Severn Sea. Abounding in wealth more than other cities, it was suited for such a ceremony. For the noble river I have named flows along it on one side, upon which the kings and princes who would be coming from overseas could be carried by ship." (Historia Regum Britanniae: "History of the Kings of Britain")

It is not until the 13th century French prose romances that Camelot began to supersede Caerleon, and even then, many descriptive details applied to Camelot derive from Geoffrey's earlier grand depiction of Caerleon."[3]

The valley of the Usk contains many sites of archaeological significance from prehistory and the valley has long been a trade route, settlement area and suitable avenue into Wales for successive invaders such as the Ancient Romans and Normans.

The Newport Transporter Bridge across the river is the oldest extant transporter bridge in the world.