Llanrumney is a parish and suburb of Cardiff in the eastern part of the city that lies across the Rhymney River in Monmouthshire. 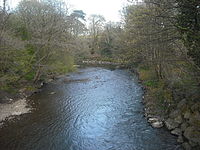 The land where modern Llanrumney stands was left to Keynsham Abbey by the Lord of Glamorgan after the Norman Conquest.[1] According to legend, Llywelyn ap Gruffudd, the prince of Wales, was interred in a stone coffin by the monks in 1282, on land where Llanrumney Hall would be built centuries later.[1]

After Henry VIII's dissolution of the monasteries in the sixteenth century, the land passed to the Kemeys family. It remained in their possession until 1951, when it and its grounds were compulsorily purchased by the local authority in order to build the large estates that can be seen there today.[2]

The name Llanrumney comes from the Welsh language word Llan, meaning "Church" or "Parish", and Rumney the Anglicised version of Rhymney the eponymous local river. Thus the literal meaning is "The Church by the Rhymney River". 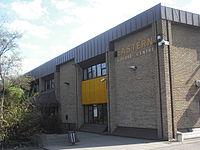 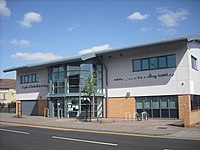 The district is a predominantly composed of large scale council estates and is bounded by St Mellons to the north, Rumney to the south and the Rhymney River (the county boundary with Glamorgan) to the west.

The area has a number of shopping precincts, the largest of which can be found on Countisbury Avenue. There is also the Eastern Leisure Centre.

Llanrumney Hall, a reputedly haunted pub, is believed to have been the home of the pirate Captain Henry Morgan from 1635. [3]