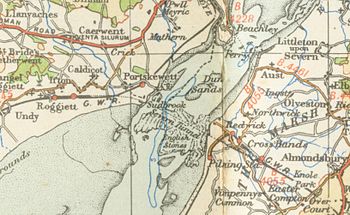 The Severn Tunnel is a railway tunnel linking Gloucestershire to Monmouthshire under the estuary of the River Severn.

The tunnel was built by the Great Western Railway (GWR) between 1873 and 1886. It is 4 miles 624 yd long, although only 2¼ miles of the tunnel are under the river. For well over 100 years it was the longest mainline railway tunnel within the UK, until the two major High Speed 1 tunnels (London East and West) were opened in 2007 as part of the Channel Tunnel Rail Link. It takes approximately 3 minutes 40 seconds to travel through the tunnel at 70 mph.

The tunnel is a critical part of the trunk railway line between southern England and South Wales, and carries an intensive passenger train service, and significant freight traffic.

The whole length of the tunnel is a single signal section, limiting the headway of successive trains. The steep gradients (1 in 90 and 1 in 100) make the working of heavy freight trains difficult.

There is a continuous drainage culvert between the tracks to lead ground water away to the lowest point of the tunnel, under Sudbrook Pumping Station, where it is pumped to surface. The hazard of ignited petroleum running into the culvert in the event of derailment of a tank wagon means special arrangements have to be made to prevent occupation of the tunnel by passenger trains while hazardous liquid loads are being worked through. Special evacuation arrangements are in place to enable the escape of passengers and staff in the event of serious accident in the tunnel.

There is restricted personnel access to the tunnel at Sudbrook Pumping Station, where an iron ladder descends in the shaft of the water pumping main; the ventilation air is pumped in at this point also. The GWR original ventilation arrangement was to extract air at Sudbrook, but the aggressive exhaust gases from the then steam train operation led to premature corrosion of the fan mechanism, and when the Cornish engines were replaced in the 1960s the draughting was reversed so that atmospheric air is pumped into the tunnel exhausting at the tunnel mouths.

On average, around 10 million gallons of water per day of fresh (spring) water are pumped from the tunnel and released into the River Severn. [1]

In the event of non-availability of the tunnel, trains are diverted via Gloucester.

The especially difficult conditions for infrastructure maintenance in the tunnel, as well as the physical condition of the tunnel structure, require a higher than normal degree of maintenance attention. Access and personal safety difficulties mean that significant work tasks can only be done during temporary line closure. 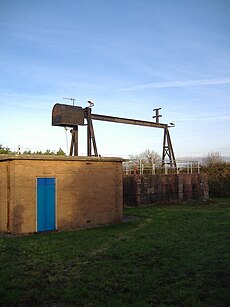 One of the pumping stations for the tunnel. This one is at Severn Beach.

Prior to the building of the tunnel, the railway journey between Bristol and Newport involved a ferry journey between New Passage and Portskewett or a long detour via Gloucester. The rail journey time could be significantly shortened by construction of a tunnel; work began in March 1873 and proceeded gradually through the 1870s.

As Thomas Walker, the contractor for the work, notes in his book, the GWR had expected the critical part of the work to be the tunnelling under the deep-water channel of the Shoots. However, the real difficulties began in October 1879, when, with only 130 yards separating the main tunnel heading being driven from the Monmouthshire side and the shorter Gloucestershire heading, the workings were inundated. The incoming water was fresh, not from the Severn but from the Welsh side, and the source became known as "The Great Spring". 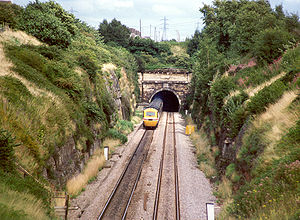 A High Speed Train enters the Severn Tunnel from the Monmouthshire side.

Thomas A. Walker was the contractor entrusted by the chief GWR engineer Sir John Hawkshaw with rescuing and completing the tunnel after the 1879 flooding. Holding the Great Spring in check required the installation of greatly increased pumping facilities, and a diver had to be sent down a shaft and 300 yards along the tunnel heading to close a watertight door in the workings and seal off the waters. This troublesome task was finally achieved in November 1880 by lead diver Alexander Lambert using Henry Fleuss' new self contained breathing apparatus, but work in the area of the Great Spring was unable to continue until January 1881 when the Great Spring was temporarily sealed off.[3][4]

Work was later disrupted in 1883 by further flooding from the Great Spring, and again Lambert managed to save the day. Additional mishaps afflicting the workings included a large tidal wave and a breakthrough of the bed of a pool (the "Salmon Pool") on the Gloucestershire side.[5] In the intervening period the Severn Railway Bridge from Sharpness to Lydney was opened.

The tunnel was completed during 1885 and a goods train passed through it on 9 January 1886, but regular services had to wait until the pumping systems were complete. On 17 November 1886, the tunnel works were inspected by Colonel F. H. Rich, the Government Inspector, with a view to the opening for passenger traffic. Colonel Rich approved the works and tunnel opened to goods trains in September and for passenger traffic on 1 December 1886 nearly 14 years after work had started.[6] Fixed Cornish engines (powered by Lancashire boilers) pumped out the Great Spring and other sources of water until the 1960s, when they were replaced by electrically powered pumps.

In the 1930s the availability of the reliable fresh water supply from the Great Spring led to the choice of an adjacent site for the Royal Navy Propellant Factory, Caerwent. Water was also supplied for paper manufacture to a mill at Sudbrook, now closed. 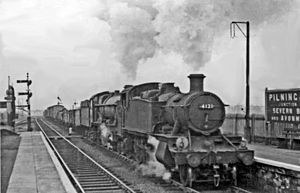 Preserved ex-GWR 5101 Class No.4121 piloting No.4998 Eyton Hall on a mixed freight train through Pilning, having climbed the bank up from the Severn Tunnel, 1961

At the newly built Severn Tunnel Junction station, the GWR built a major marshalling yard, which: distributed east and north, coal from the South Wales Valleys towards London and the Midlands; created mainline and localised mixed-traffic freight from goods shipped in from the Midlands, the Southwest and along the Thames Valley, both westwards into Wales and vice versa.

Due to the access gradients, in the steam era assistance was needed by all heavy trains through the Severn Tunnel, which entailed (eastwards, from Severn Tunnel Junction): 3½ miles of 1-in-90 down to the middle of the tunnel; a further 3½ miles at 1-in-100 up to Pilning; a short level then 3½ miles more at 1-in-100 to Patchway. This meant that the associated locomotive shed at Severn Tunnel Junction (88E), had a large number of pilot and banking locomotives to assist heavy trains through the tunnel. Pilot locomotives usually worked east and were detached at Pilning, and then work west piloting a second train back to the marshalling yard. In the latter days of BR Steam, these locomotives were mainly a group of latter-built GWR 5101 Class 2-6-2T locomotives, the bulk of which now form the core preserved stock of that class today.[7]

In 1924, the Great Western Railway started a service to transport cars on rail trucks through the tunnel between Pilning and Severn Tunnel Junction. The service was an alternative to the Aust Ferry, which had an erratic timetable determined by the tides, or the long road journey via Gloucester. The service continued after the war, but was made redundant by the opening of the Severn Bridge in 1966.[8] 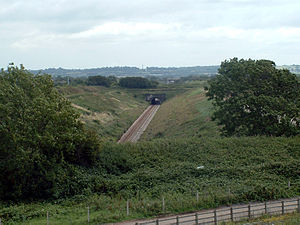 The approach to the tunnel from the Gloucestershire side. 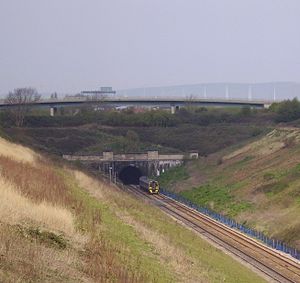 The Tunnel entrance on the Gloucestershire side.

The Second Severn Crossing (M4 motorway) crosses over the tunnel on a "ground level bridge" on the Gloucestershire side (near the Salmon Pool), supported in such a way that no load is imposed on the tunnel. The opportunity was taken to renew the concrete cap above the tunnel in the Salmon Pool during bridge construction.

As part of the 21st-century modernisation of the Great Western Main Line, the tunnel was electrified in 2016. The tunnel has good clearances and was relatively easy to electrify, although due to its age the seepage of water from above in some areas provided an engineering challenge. Rather than the use of standard overhead cabling, the tunnel was instead electrified with a solid conductor rail mounted on the tunnel roof.