Brockweir is a small village on the eastern bank of the River Wye, within the Forest of Dean, Gloucestershire. A road bridge links it across the river to Monmouthshire, about a mile outside the village of Tintern and 7½ miles north of Chepstow. The village is close to both the Offa's Dyke Path and the Wye Valley Walk.

The name Brockweir dates from about the 7th century; previously it was known in Welsh as Pwll Brochuail, the pool of Brochuail or Brockmael, a prince of Gwent.[1] The weir was owned by Monmouth Priory and later Tintern Abbey; its remains can be seen as shallows under Brockweir bridge.

The village existed from at least the 13th century, as a hamlet within the parish of Hewelsfield. The oldest existing building, the Malthouse, dates in part from the 15th century and probably formed part of a grange owned by Tintern Abbey. Another house, the Manor House, dates from about 1600, and many other houses date from the 18th century.[2]

For centuries Brockweir had a thriving shipbuilding, fitting-out and repair industry. Brockweir was the highest point reached by a normal tide on the Wye, and a key transhipment point where the cargoes of sea-going ships of up to 90 tons[3] were transferred onto barges to be sent upstream, and the products of Herefordshire and the Forest of Dean were sent back to Bristol and beyond. In 1587, one resident, John Gethin, was killed on his boat in the Bristol Channel in an affray with Bristol merchants.[2] 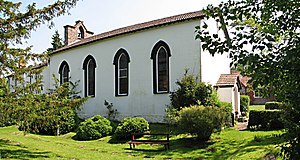 According to some sources, in the early 19th century the village was thought to be one of the most lawless places in the country. Its reputation was earned by having about 16 public houses,[3] to cater for the stevedores who were employed to load and unload the ships at the quayside. Only one narrow road led into the village, and goods were usually carried by donkeys[2] or by water, with a ferry taking travellers to and from the Welsh bank of the Wye[3] In 1833 the Duke of Beaufort issued an edict for the Moravian Church to be set up in the village because of its lawless reputation, and the church was built on the site of a former cock fighting pit.[1] The first minister was Lewis West, who drew congregations of up to 200 people.[4] The minister described the life of its watermen as being centred on beerhouses, skittle alleys, and cockfighting, and said that it had the reputation of a "city of refuge" for lawless elements. The church was rebuilt later in the 19th century.

Several chapels, a school, the decline of its trade, and an influx of outsiders to the area gradually changed the character of the village.[2] During the early 20th century several Nonconformist groups, including Quakers, Pentecostalists, and Christian Scientists, held meetings in Brockweir and the surrounding area. The cast iron road bridge was built in Chepstow by Edward Finch & Co., and was opened in 1906. The last ship to sail to Brockweir was the Belle Marie in 1914,[3] and the last Wye trows were built in the village in 1925. In 1929 Brockweir Halt was opened on the Wye Valley Railway on the Monmouthshire side of the bridge. The halt closed in 1959.

The writer Flora Klickmann (1867–1958), who wrote several popular books about her experiences of living in the Wye valley as well as on other subjects, is buried at Brockweir.

The Brockweir and Hewelsfield Village Shop and Cafe is established as a non-profit making community enterprise, staffed by volunteers from the local community. It was opened by the Prince of Wales in December 2004, when he described the project as "a triumph of community spirit".[5]

The community shop includes a café, general store and food outlet, post office, library kiosk, art gallery and IT training suite. The building is of traditional oak construction combined with sustainable technology, and aims to be environmentally friendly[6] with photovoltaic roof shingles producing electricity, the excess from which is exported back to the national grid. The building also has a geothermal heating system, drawing energy from the ground under the village playing field.[7][8]