From Wikishire
Jump to: navigation, search
Not to be confused with the River Honddu that joins the Usk in Brecon 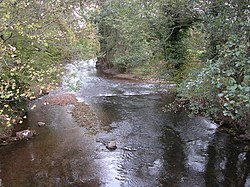 The confluence of the Monnow and Honddu at Alltyrynys

The River Honddu is a river in the Black Mountains within the Brecon Beacons National Park and counties of Brecon and Monmouth. It rises within Brecknockshire near the Gospel Pass at the head of the Vale of Ewyas down which it flows, passing southwards into Monmouthshire to Llanvihangel Crucorney before turning northeastwards to join the River Monnow at the point on the Monmouthshire-Herefordshire border where that river too makes a sudden change of direction. The only significant tributary to join the Honddu is the Nant Bwch though numerous smaller streams flow down the steep sides of the Vale of Ewyas to add to the river's flow.[1]

It is likely that the Honddu continued on a southerly course beyond Llanvihangel Crucorney prior to the last ice age but has since been diverted by the presence of a large terminal moraine which stretches impressively across the valley to the west of the village. The southwest to northeast alignment of both the Honddu and the Monnow appear to be related to the course of the Neath Disturbance, an ancient geological weakness, which runs through the valley to the north of the Sugarloaf and on towards Hereford.

The upper valley of the Honddu has the characteristic U-shape of a glacially scoured valley though it is not clear where the ice originated that cut this deep trench through the eastern Black Mountains. The modern Honddu is thus something of a misfit river. It has been speculated that glacial ice from the Wye valley glacier invaded the Vale of Ewyas over the Gospel Pass, though no evidence of any glacial till containing clasts of rock from mid Wales has yet been found within the valley to support that proposal.[2]

Within the valley is Llanthony Priory, a popular attraction for the many visitors to the National Park. Towards the lower end of the Vale of Ewyas is Cwmyoy with its celebrated church, distorted by the movement of the hillside on which its stands; the entire hamlet has been built on an ancient, and not entirely dormant, landslide.