Pengam is a former coal-mining village and civil community in western Monmouthshire.

Most of the village is on the east bank of the Rhymney River, in Monmouthshire, but those parts of the village on the west bank are known as Glan-y-Nant and are in Glamorganshire.

The population density of Pengam is approximately 4,204 people per square mile. The actual size of the electoral ward is 0.9 square miles.

The biggest employer in this area (with 29.42% of people) is the manufacturing industry.

Coal and the railways

Two collieries previously existed in, or near, Pengam. One at the top of the Main Street (Pengam Pit), and the other was on the Aberbargoed Road (Britannia Pit).

As with most House Coal collieries in this area, Pengam was troubled with water inundation and heavy water pumps worked around the clock to avoid the mineworkings flooding. Production ceased in 1956 but it was kept open as an underground pumping station, to prevent the flooding of the nearby Britannia colliery. There was a landing, about halfway down in each of the Britannia shafts (North and South) from which it was possible to access Pengam pit bottom. The official entrance to Pengam colliery was adjacent to Pengam (Mon) station, on High Street previously known as Waunborfa Road.

Pengam at one time had two railway stations – one in Glamorgan and one in Monmouthshire. The line in Pengam (Mon) belonged to the Brecon and Merthyr Railway. Construction began in 1825 and it was opened in 1836, mainly to cater to the needs of the small pits and levels, and then increasingly for the collieries when they were sunk at the start of the century. It also accommodated the desire for more mobility by the rapidly growing population of the valley, when the steam locomotives pulled the passenger carriages up and down the line. The railway track from Newport to Brecon, or Tredegar, branched at Machen, the line going from there to Caerphilly and Merthyr Tydfil. The line branched behind Britannia Colliery for Brecon, or carried straight on to Tredegar where the line terminated. 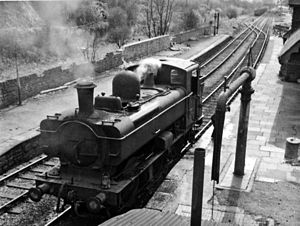 The locomotives hauling the coal trains along this line were pannier-tank type steam engines. The station, and stationmaster’s house were directly adjacent to Pengam pit.

Pengam (Mon) station closed in 1962. The other in Glamorgan was opened in 1858 by the Rhymney Railway and remains open as Pengam railway station.

Pengam was the location of the Austin Junior Car Factory set up by Leonard Lord, managing Director of the Austin Motor Company, to employ disabled miners making children’s pedal cars. More than 30,000 J40 pedal cars were built between 1949 and 1962. Apart from a few managers and trainers from Longbridge, the factory was considered unique in the world at the time for having a workforce that was 100% disabled – 60% of whom suffered from Complicated Pneumoconiosis.[1]