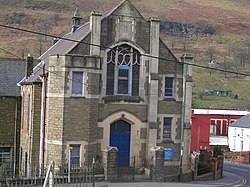 The name Cwm is thought to have derived from the farm on the present day nature reserve (Silent Valley), Cwm Merddog. Cwm is the Welsh language word for valley and the name Merddog is believed to be a corruption of the name of the old farm that used to be here, Troed y Rhiw y Myrdd Fach, which translated means 'the foot of the myriad little hills'. But with the development of the village and coal industry the name was just simply shortened to Cwm. Locally the village to its inhabitants and neighbouring areas is sometimes referred to as The Cwm.

Originally a rather insignificant spot in the Ebbw Valley, with only a few scattered farms and a water mill until the end of the nineteenth century with the sinking of the Marine Colliery in 1889. Cwm developed as a village at the turn of the twentieth century, with the building of numerous churches, chapels, public houses, working man's clubs, a miners' institute etc., and terraced housing typical of the South Wales Valleys, being constructed in a very straight, linear pattern to house the community that worked in the local collieries.

The main employment of the village was the coal industry as there were several small collieries and drift mines located on the mountain side as well as the main colliery located on the valley floor.

The sinking of this colliery began in 1889 by the Ebbw Vale Steel, Iron and Coal Company Ltd. The downcast shaft being 418 yards deep and the up-cast 414 yards. The first coal was produced in 1893.

On 1 March 1927 an underground gas and coal dust explosion killed 52 men. The death toll would have been many more if it had not been for the quick thinking of the manager Mr. Edward Gay, who on his arrival at the mine, ordered the ventilation fan to be slowed down so that it would not fan the flames of any fires burning below. It turned out that his actions saved the lives of the men still alive in the district where the explosion occurred. At this time there were 1,400 men employed at the colliery but fortunately when the explosion occurred only the night shift were working underground.

By 1935 the ownership of the colliery change hands to Partridge, Jones & John Paton Ltd. who worked the colliery until Nationalisation in 1947, when there were 1,540 men employed.

During the 1970s it became integrated with Six Bells Colliery with all the coal being handled at the Marine. In 1982 £2.5 million was spent on a new skip winding system, also a new coal handling plant was installed on the surface. Marine was the last deep mine to work in the Ebbw valleys, it closed in March 1989.

The village and the colliery were connected to the Great Western Railway network with a station in the middle of Cwm and a halt at Marine Colliery to transport the coal it produced. However the station was closed to passengers in 1962 and Marine halt shut when the colliery was demolished in 1989. With the reinstatement of passenger trains on the Ebbw Valley Railway in 2008, there are plans to rebuild Cwm railway station but there has been no commitment or timescale given to a station in Cwm, and it remains a future aspiration.

In 2002 work began on the much-needed and overdue Cwm bypass, which has reduced traffic travelling through the village thus easing congestion and pollution.

Cwm Albion spent a single season in the Southern Football League in 1911–12, but withdrew due to financial problems.