Risca is an industrial town and ancient parish in Monmouthshire, of approximately 11,500 people. It is today part of the Newport conurbation (which as a whole has a population of 140,200). Risca had a railway station opened on the Ebbw Valley Railway in February 2008, after a gap of 46 years.

The town lies at the south-eastern edge of the South Wales Coalfield, and a coal mine used to operate in the town with terraced housing nearby for workers. On 1 December 1860, an explosion at the Black Vein Colliery at Risca killed more than 140 men and boys as well as 28 pit ponies.

Risca is home to Ty-Sign, which is a large housing estate; built in the early sixties as a satellite village for the (then) new steel works at Llanwern. It is surrounded to the east and west by several extensively wooded hills including Mynydd Machen (1,188 feet) and Twmbarlwm (1,375 feet) which attract tourists for the hillwalking and mountain bikers to Cwmcarn Forest Drive. 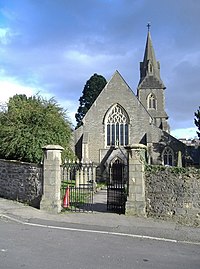 The local Church in Wales church is St Mary the Virgin

St Mary and St Mercurius (a Grade II listed building) is now a Coptic Orthodox church; the first in Wales. It was built as a Wesleyan Methodist Church in 1837, rebuilt on the same site in 1852 and was dedicated to St John, and later known as Trinity Methodist Church.[1]

Twmbarlwm, has the remains of an Iron Age hill fort near its summit,[2] and this is believed to have been built by the Silures, the tribe of Britons who inhabited the area before and during the Roman period.

The Welsh Oak, a pub on the outskirts of Pontymister, was the meeting place for the Chartists before they marched on Newport during the Newport Rising of 1839.

The park 'Tredegar Grounds' was donated to the people of Risca in 1897 by Lord Tredegar to commemorate Queen Victoria's Diamond Jubilee and in return the 'Jubilee' statue was erected by public subscription 'in recognition of Lord Tredegar's generosity to the neighbourhood.' A small bronze statuette of Samson, a bearded figure dressed in a loincloth, stands on a circular stone plinth on a square stepped base.

The town is served by Risca and Pontymister railway station.

The Monmouthshire Canal passes through the town.

There are some extensive mountain bike trails on the wooded hills just to the north of the town, at Cwmcarn, which are receiving increasing popularity.