Nantyglo is a village in the ancient parish of Aberystruth and county of Monmouth situated deep within the valleys between Blaina and Brynmawr. Together with its near-neighbour Blaina it forms the town of Nantyglo and Blaina. 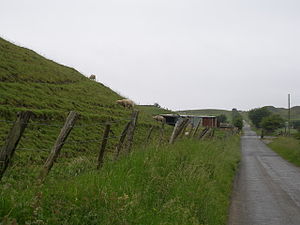 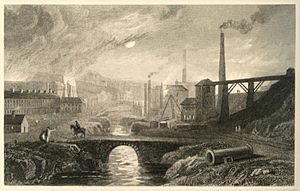 Nantyglo Ironworks 1820
"The immense iron-works of Nant y Glo, which present so extraordinary an appearance,and seem to the distant spectator as if the whole surrounding country were in flames, were originally commenced by Hill, Hertford, and Co., and were held under lease from the owners of Blaenavon works. They were finished, at a vast expense, in 1795; and after being wrought a year, were discontinued for a time, on account of a dispute among the proprietors. They then consisted of two furnaces, several forges, a steam engine, and the necessary buildings and machinery for smelting and forging, but have since become of vast extent and importance."[1]

During the middle of the 19th century, Nantyglo was one of the most important iron producing centres in the world.

In March 1811 Matthew Wayne (1780–1853) furnace manager at Cyfarthfa and Joseph Bailey, nephew of Richard Crawshay of Cyfarthfa, together purchased the lease of the existing but long stopped ironworks at Nantyglo.

They were so successful in reviving the works that by 1820 Matthew Wayne was able to sell-out and set up his own business at the Gadlys, Aberdare and Joseph's brother, Crawshay Bailey, took Wayne's place in the Nantyglo ironworks partnership.

Turning Nantyglo into one of the great ironworks of the kingdom the two brothers, by 1827, had seven blast furnaces operating at Nantyglo and added the nearby Beaufort Ironworks to their business in 1833 putting their sister's son, William Partridge (1800–1862) in charge.

Joseph Bailey, whose wife had died in 1827, remarried in 1830 and retired from personal direction of Nantyglo to live at Glanusk Park, Crickhowell and manage his very extensive landed estates.

Crawshay Bailey continued to live at Ty Mawr, Nantyglo, and ran the iron-works. In the 1840s he retired to Llanfoist House, Abergavenny, leaving direction to his nephew, Joseph's son, Richard Bailey (1816–1853) who died in Dijon France and was succeeded by his younger brother Henry, described in 1868 as managing partner.

At their height c.1844 the Baileys employed 3,000 men and 500 women and children in their ironworks and coal mining operation.

The Bailey interests disposed of the Nantyglo works by 1869-70.

After the Battle of Waterloo and the final defeat of Napoleon there was a general slump in iron manufacture, although Nantyglo was the only ironworks which actually increased its exports, and the high cost of wheat caused acute unrest throughout the country. Fearful of unrest (which did not eventuate) Matthew Wayne and Joseph Bailey had built two fortified towers, the Nantyglo Round Towers in 1816.

Zephaniah Williams (1795–1874) a Master Collier and innkeeper, keeping the Royal Oak Inn at Nantyglo, from where he used to pay his colliers, was a free thinking man in religious matters and the local Working Men's Association met at his home. Williams emerged as a natural leader during the Chartist movement in Monmouthshire. Along with John Frost and William Jones, he led a large column of men from the Nantyglo area to march south on the Westgate Hotel, Newport, site of what is sometimes regarded as the greatest armed rebellion in 19th century Britain.

For his part in the 1839 Chartist Newport Rising he was convicted and deported to Australia. He died there a prosperous man in 1874.