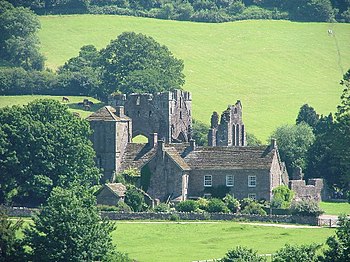 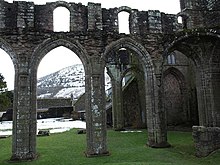 Llanthony in the snow

Llanthony Priory is a partly ruined, thoroughly romantic, former Augustinian priory in the village of Llanthony in Monmouthshire. It sits in the secluded Vale of Ewyas, a steep sided valley within the Black Mountains. Llanthony is in the very north of the county, seven miles north of Abergavenny on an old road to Hay on Wye. The main ruins are under the care of Cadw and entrance is free.

The priory is a Grade I listed building.[1] Within the precincts of the Priory are two other buildings with Grade I listed status: the Abbey Hotel[2] and the Church of St David.[3]

The priory dates back to around the year 1100, when the Norman nobleman Walter de Lacy reputedly came upon a ruined chapel of St. David in this location, and was inspired to devote himself to solitary prayer and study. He was joined by Ersinius, a former Chaplain to Queen Matilda, the wife of King Henry I, and then a band of followers. A church was built on the site, dedicated to St John the Baptist, and consecrated in 1108. By 1118, a group of around 40 monks founded there a priory of Canons Regular, the first in Wales.

In 1135, after persistent attacks from the local population, the monks retreated to Gloucester where they founded a daughter cell they named Llanthony Secunda. However, around 1186 another member of the de Lacy family, Hugh de Lacy, 1st Earl of Ulster, endowed the estate with funds from his estates in Ulster to rebuild the priory church, and this work was completed by 1217. Also as there are letters from Pope Clement III (CSM,i,p. 157-159), between 1185 and 1188, confirming further grants and gifts to the priory from Adam de Feypo and Geoffrey de Cusack in Ireland.

The Priory became one of the great mediæval buildings, in a mixture of Norman and Gothic architectural styles. Renewed building took place around 1325, with a new gatehouse. On Palm Sunday, April 4, 1327, the deposed Edward II stayed at the Priory on his way from Kenilworth Castle to Berkeley Castle, where he is alleged to have been murdered. 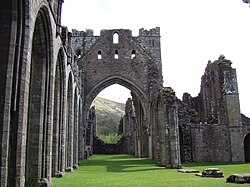 Following Owain Glyndŵr's rebellion in the early 15th century, the Priory seems to have been barely functioning. In 1481 it was formally merged with its daughter cell in Gloucester, and after 1538 both houses were suppressed by Henry VIII's Dissolution of the Monasteries.

The 18th and 19th centuries

The buildings at Llanthony gradually decayed after the Dissolution to a ruin, although in the early eighteenth century the mediæval infirmary was converted to the Church of St David.[4] In 1799 the estate was bought by Colonel Sir Mark Wood, the owner of Piercefield House near Chepstow, who converted some of the buildings into a domestic house and shooting box. He then sold the estate in 1807 to the poet Walter Savage Landor.

Landor needed an Act of Parliament, passed in 1809, to be allowed to pull down some of Wood's buildings and construct a house, which was never finished. He wanted to become a model country gentleman, planting trees, importing sheep from Spain, and improving the roads. There is still an avenue of trees in the area known as "Landor's Larches" and many old chestnuts have been dated back to his time.

Landor described the idylls of country life, including the nightingales and glow-worms in the valley to his friend Robert Southey. However the idyll was not to last long as for the next three years Landor was worried by the combined vexation of neighbours and tenants, lawyers and lords-lieutenant and even the Bishop of St David's. Many of his troubles stemmed from petty squabbles, arising from his headstrong and impetuous nature. He wasted money trying to improve the land, and the condition of the poorer inhabitants. The final straw was when he let his farmland to one Charles Betham whom Landor viewed as incompetent and extravagant and paid no rent. After an expensive action to recover the debts from Betham he had had enough, and decided to leave the country, abandoning Llanthony to his creditors - which was principally his mother. The estate was administered in his absence by his mother and cousin, but many of the buildings continued to disintegrate thereafter. 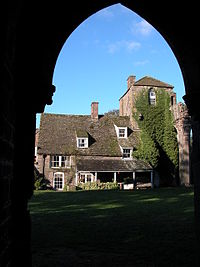 The ruins have attracted artists over the years, including JMW Turner who painted them from the opposite hillside. The priory was acquired by the Knight family in the 20th century.

The Offa's Dyke Path runs close by on the Hatterrall Ridge above the Llanthony Valley which marks the boundary hereabouts between Monmouthshire and Herefordshire.