Usk is a small town in Monmouthshire, standing 10 miles north-east of Newport.

Usk is noted for its rural setting, tranquil lifestyle and quality of life. It feels more like a village than a town. The River Usk, from which the town takes its name, flows through the town and is spanned by an ancient, arched stone bridge at the western entrance to the town. The town has given its name in turn to Usk Hundred.

A castle above the town supervises the even more ancient crossing; the fording point where the River Usk can be crossed on foot in the summertime even today.

Usk was a thriving market town through the Victorian period. The population is estimated now at less than 2,500. A small town, it preserves its charm, and has a number of pubs, restaurants and antique shops for the visitor. The narrow main street, Bridge Street (the A472), has a collection of old houses, restaurants, pubs, shops and businesses, some in premises dating back to the 15th century. The road passes Twyn Square, a large town square.

"Usk Island" is a park at the edge of the river. (It is not an island in point of fact but the Welsh ynys may mean an island or a river meadow, and it is the later). The park is mostly laid to grass, with surrounding woodland. It also has a substantial adventure playground.

Names of the town

Usk takes its English name from the River Usk, whose name is derived from an ancient Celtic word which may mean "river" or maybe "abounding in fish". The name resembles many others in Great Britain bearing the name Esk or variants. The base word may be related to the Gaelic uisge ("water").

The parish church is the Priory Church of St Mary.[2] The core of the church is its stout Norman town, which dates from the twelfth century, built for the priory founded in Usk in about 1160 by Richard de Clare, best know to history as Strongbow.

A great deal of repair was needed to the church after the burning of Usk in 1405. After the dissolution of the monasteries St Mary's, after alterations, remained as the parish church.

Usk is reckoned to have been founded in about AD 55 as the Roman legionary fortress of Burrium, the earliest legionary fortress west of the Wye. Although the site was constricted by hills, subject to flooding, and not on a navigable river, it offered good communications inland. However, by around AD 75 its disadvantages had become apparent and the Romans relocated their military base south to Isca Silurum (Caerleon). The Roman remains at Usk are buried on the southern side of the town.[3] 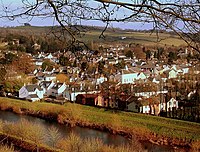 After the Roman retreat from Britain the fortress of 'Burrium was abandoned, but the village here continued, and there is evidence of iron working in the early Middle Ages.

The Normans also realised Usk's geographical and military importance within the region, and the powerful de Clare family built Usk Castle. The castle,[4] does not now glower over the town, standing hidden from view by surrounding trees planted in the early 20th century. It is one of the few castles still privately owned and occupied.

A Benedictine priory was founded around 1160 by Richard de Clare, known as Strongbow, most famed for leading the invasion of Ireland in 1170. The priory church served both the priory and the parish, and though the priory is gone, the church, St Mary’s, remains the parish church.

The town of Usk was incorporated by charters granted by Edmund de Mortimer, King Edward II, King Edward IV, and succeeding monarchs.[5] Its location meant that it was inevitably frequently caught up in the disputes between the marcher lords and the Welsh princes in this section of the Welsh Marches.

Usk was the birthplace of Adam of Usk, whose chronicle records the events of 1403, when Owain Glyndŵr burned Usk to the ground while gaining control of south Wales from the English under King Henry IV and his Monmouth-born son, later to become King Henry V. The Battle of Pwll Melyn was fought at Usk in 1405, at which the King's forces routed Glyndŵr with much slaughter. Three hundred rebels were executed in front of Usk Castle when taken prisoner. Owain's brother, Tudur, was killed in this battle. In 2005, the 600th anniversary of the battle of Pwll Melyn was commemorated by a son-et-lumière show.[6]

From the late 18th century, Usk became well known for the quality of its Japanware, a process of decorating metals by applying a lacquer to tinplate. The process, known as Pontypool Japan, was first developed in the west by Thomas Allgood of nearby Pontypool and was taken on in Usk by his grandsons Thomas and Edward Allgood.[7]

About three miles west of Usk is the 1,000 acre site of the munitions production facility of BAE Systems at Glascoed.