Tredegar House is a 17th-century Charles-II country house mansion in the city of Newport, Monmouthshire that for over five hundred years was home to the Morgan family, later Lords Tredegar; one of the most powerful and influential families in the area. Described as "The grandest and most exuberant country house"[1] in Monmouthshire and one of the "outstanding houses of the Restoration period in the whole of Britain",[1] the mansion stands in the 90-acre Tredegar Park. It became a Grade-I listed building on 3 March 1952.[2]

History of the Building

The earliest surviving part of the building dates back to the late 15th century.[3] The house was originally built of stone and was very grand indeed, grand enough for King Charles I to visit. Between 1664 and 1672, however, William Morgan decided to rebuild the house on a larger scale from red brick, at that time a rare building material in Wales. The name of Inigo Jones has been linked with the building - but this not confirmed by sources, and it seems we will never know who the architect was. In his 1882 publication, local historian Octavius Morgan provides a plan of an intricate garden maze which was in place prior to the 1660s improvements and which probably dated from the time of Queen Elizabeth I.[4]

Tredegar's name came from Tredegar Fawr, the name of the mansion or seat of the old Morgans, who were descended from Cadifor the Great the son of Collwyn; and the owners of the land upon which Tredegar stands. The earliest record of someone with the name Morgan living at Tredegar is 1402: a Llewellyn Ap Morgan. Today Tredegar House, set in a beautiful 90-acre park, is the finest Restoration house in Wales and for over five hundred years the estate (including Ruperra Castle) was home to the Morgan family, later Lords Tredegar; one of the most powerful and influential families in the area.

John Morgan was created a Knight of the Holy Sepulchre (possibly c.1448). Later, when Henry Tudor was crowned King Henry VII it was of great benefit to the Morgans of Tredegar who were great supporters of Henry. Sir John received reward for his early support, and on 7 November 1485 he was appointed by the new king to the office of ‘Sheriff of Wentloog and Newport’ and made ‘Steward’ of the Machen Commote. His elevation to officer of the Tudor crown placed Sir John Morgan's influence and power at a new height. Around 1490, he commissioned the building of a new house at Tredegar. A wing of Sir John's stone manor house still exists. It is now the oldest part of the present-day Tredegar House.

A cadet branch of the ‘Tredegar Morgans’, probably nephews of Sir Thomas Morgan, included three brothers, Thomas, Robert and Edward. Thomas became Major-General Sir Thomas Morgan, 1st Baronet (1604–79), served in the Commonwealth forces during the English Civil War 1642-9, was made Governor of Gloucester in 1645, fought in Flanders, was wounded and in 1661 retired to his estate at Kynnersley, Hertfordshire. Recalled in 1665 to become Governor of Jersey, he died at St Helier in April 1679. Married on 10 September 1632, he had nine sons, of whom the eldest, Sir John Morgan followed in his father profession. Robert Morgan, (born circa 1615) became a farmer in Llanrhymny, known today as Rumney three miles from Tredegar, and was father of Henry Morgan (who would have a successful career in the Caribbean as a privateer, and pirate). Edward Morgan became Colonel Edward Morgan (born circa 1616 - Colonel after 1665), a Royalist during English Civil War 1642-49 and Captain General of the Kings forces in South Wales. After the King's arrest and execution, he fled to the continent and married Anna Petronilla the daughter of Baron von Pöllnitz from Westphalia (Governor of Lippstadt, 20 miles east of Dortmund in Germany). They had six children, two sons and four daughters (including Anna Petronilla and Johanna). He was appointed Lieutenant Governor of Jamaica 1664-65.

During the civil war after the Battle of Naseby, King Charles I visited Tredegar House in 1645. In 1661 William Morgan (d.1680) rebuilt the house on a very grand scale, with the help of the huge dowry of his wife, Blanche Morgan. Their fortunes continued to flourish down the generations, tremendously enhanced by the foresight and business enterprises of Sir Charles Gould throughout the 18th century. Following his father's financial successes, his son further expanded several commercial and industrial projects, and virtually established Newport as an important trade centre. Whilst consolidating their influence on the political and economic issues of the country, they secured a baronetcy in 1859.

In 1854, Godfrey Morgan fought in, and survived, the Charge of the Light Brigade at Balaclava. Godfrey was 22 and Captain in the 17th Lancers. His steed, Sir Briggs, also survived and lived at Tredegar House until the horse's death at the age of 28. The horse was buried with full military honours in the Cedar Garden at Tredegar House. The monument still stands there today. In 1905 Godfrey was created the first Viscount Tredegar. He never married and on his death the estate passed to a relation. In 1920, the Tredegar Park Polo Club was founded at Tredegar House.[5]

Later, extravagance, eccentricities, and weighty death duties seriously depleted the family's financial assets throughout the next three generations. John Morgan, 6th Baron Tredegar died childless in 1962 aged 54. His death signalled the end of the Morgans of Tredegar. In 1951, Tredegar House was stripped, the remaining contents were auctioned, and the estate was sold.

After 1951 the house was bought by the Catholic Church as a convent school with boarders, later St. Joseph's Roman Catholic comprehensive school. It was bought by the Newport Corporation in 1974, giving rise to its then status as "the grandest council house in Britain".[3]

Newport City Council provides guided tours which cover of most of the house, many major rooms and the vast kitchens. The tours include details of its long history and the personalities involved. 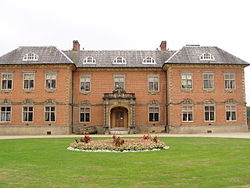 In December 2011 the National Trust signed an agreement with Newport City Council to take on the management of the building, as well as the 90 acres of gardens and parkland, on a 50-year lease from 2012. The Trust said that Tredegar House was of "great importance" as many similar properties had been lost in the past 100 years.[6] The new arrangement allowed regular open access to the House.[7]

Other events, which occur throughout the year, include children's fun-days, Easter, Pirates Day and Christmas. There are also special tours, in addition to the normal house tours, including those focusing on the servants.

The House is approved for marriages and civil ceremonies, and is used by Newport City Council for Mayoral functions. The Morgan Room, The Orangery and the Servants' Hall may each be hired for private functions.

The House is popular for filming. The television series Being Human and The Hairy Bikers have both recently used the house as a location. Many episodes of Doctor Who, since the programme was revived in 2005, have used Tredegar House for location filming, including the 2008 Christmas special "The Next Doctor" and the 2009/2010 Christmas/New Year special "The End of Time".