Portskewett is a village in south-eastern Monmouthshire. It is located four miles south-west of Chepstow and a mile east of Caldicot, in an archaeologically sensitive part of the Caldicot Levels on the shore of the Severn Estuary. The Second Severn Crossing passes overhead carrying the M4 motorway. 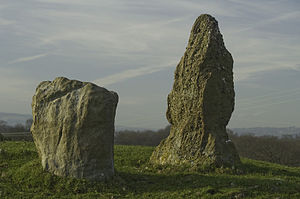 At the eastern edge of the village, in a privately-owned field opposite Black Rock Road, very near to the Leechpool turn, is evidence of a significant neolithic chambered tomb or long barrow.

A small group of puddingstones mark the entrance of the site known as Heston Brake. Human skeletons, cattle bones and some pottery were discovered in the chamber when it was excavated in 1888.[1] 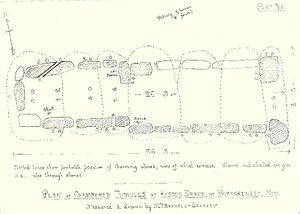 The stones can be reached by following the public footpath accessed via the kissing gate which is situated on the left[2] about 150 yards from the main road toward Leechpool.

There is some evidence of a Roman villa, with possible British Iron Age antecedents. There are also remains of a late Roman temple on Portskewett Hill, and many coins of the 3rd and 4th centuries have been found.[4]

The name "Portskewett" is generally believed to derive from the Welsh language Porth-is-Coed, meaning "the harbour below the wood", or alternatively "the harbour of the area below the wood" - that is, the post-Roman cantref of Gwent Is Coed, centred on Caerwent about three miles away.[3] An alternative derivation is from Porth Ysgewydd, the port of the elder wood.

According to tradition, in about the 6th century Caradog Freichfras, king of Gwent, moved his court from Caerwent to Portskewett, where there was a strongly flowing fresh water spring which only dried up later when the Severn Tunnel was built. Alternatively, the court may have been based at nearby Sudbrook.[5]

The tradition of "King Harold's Palace"

The uneven ground south of the village church is shown on some older maps as "Harold’s Field". According to the Anglo-Saxon Chronicle, in 1065 Earl Harold of Wessex, having defeated Gruffydd ap Llywelyn and conquered areas around Hereford and down the Wye, and was in the process of constructing a building on the site which he could use as a base for hunting when it was attacked and destroyed by a force under Caradog ap Gruffydd, King of Gwent. Harold never had the opportunity to take his revenge; in January 1066 he became king of England, and later that year was killed at the Battle of Hastings.[5] Archaeologists consider it likely that the hunting lodge would have been built on the same site as Caradog Freichfras' earlier court.

A geophysical survey carried out at the end of 2005 revealed extensive remains in the area. In May 2007, an excavation was carried out for the Channel 4 TV programme Time Team, broadcast on 30 March 2008. The excavation revealed that a Norman fortified tower house had existed on the site, probably contemporaneous with the nearby church, and reached by a creek off the Severn. However, no conclusive evidence was found of a Saxon building, which would have been built of wood.[6]

After the Norman conquest the area became a "hardwick" or cattle ranch. The village church[7] is dedicated to St Mary. The original parts of the church date back to the late 11th century and are made of local limestone; the carved crosses on the blocked-up back doorway could be even older. The church has been restored and altered on a number of occasions. The small windows in the upper part of the tower, for example, are typical of the 16th century. In the corner of the churchyard can be seen the steps which formed the base of a mediæval churchyard cross.[5]

From Norman times until 1919, the village was part of the St Pierre estate, and was held by the Lewis family of St Pierre. It declined in importance after the Norman period and for many centuries it was an agricultural village of no distinction, although it does appear that some iron mining continued near the village until at least the 17th century. In 1662 Thomas Lewis of St Pierre, lord of the manor, granted the right to mine iron in the manor to Henry Rumsey.

By the 19th century the village was in decline. Between 1801 and 1861 the population of the parish, which includes Sudbrook, fell from 216 to 175. However, it expanded rapidly later in the 19th century, as housing was built for workers on the Severn Tunnel and with industrial development at nearby Caldicot. At the turn of the 20th century the population was some 900, steadily rising to about 1,300 by the 1970s.[8] The village lost its railway station (on the Newport to Gloucester line) when it was closed under the Beeching Axe in 1964.

Black Rock, on the Severn estuary immediately south east of the village, has been an important crossing point of the River Severn for many centuries. Numerous coins found in the mud show that it was in constant use throughout the Roman period, on the route between Aquae Sulis (Bath) and Venta Silurum (Caerwent). 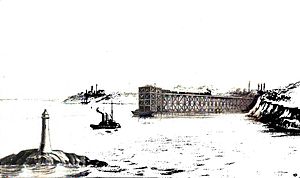 By the 18th century, a regular ferry service crossed the Severn estuary from Black Rock to New Passage on the Gloucestershire side, carrying passengers, cattle and iron ore.[3] The Black Rock Hotel served travellers and became a popular local entertainment venue; it was later destroyed by fire. In 1863, the Bristol and South Wales Union Railway built a branch from the main line to Black Rock. Trains would travel out onto a wooden pier, where the passengers would get off before climbing aboard the ferries. The pier was severely damaged by fire in 1881 and demolished after the Severn Tunnel opened in 1886, but parts can still be seen at low tide.[9][10] 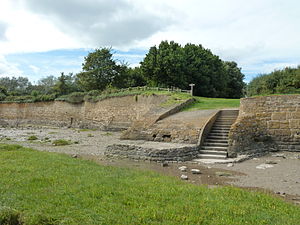