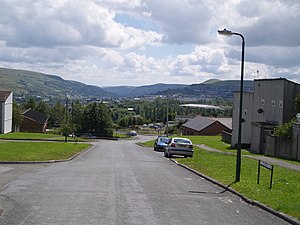 Beaufort is a village located on the border of Brecknockshire and Monmouthshire. According to the 2011 census, the population of the ward of Beaufort is 3,866[1].

The settlement arose on the boundary of two parishes, Llangattock in Brecknockshire and Aberystruth in Monmouthshire on the 1779 establishment of the Beaufort Iron Works by Edward and Jonathan Kendall after whom the new settlement was first named.

The village's name derives from the fact that much of the local land was originally owned by the Duke of Beaufort. The border between Beaufort and Ebbw Vale itself is generally considered to be the Ebbw River which passes close to St David's Church.

'Carmeltown', presumably so-called because of the presence of Carmel Chapel, lies between the Rassau and the rest of Beaufort. Confusingly, the 'rest of Beaufort' (i.e. geographically the eastern part of Beaufort) is frequently simply referred to as 'Beaufort' or 'Beaufort Hill'.

The eastern end of Beaufort is more densely populated than Carmeltown or the border areas of Rassau or Brynmawr. Beaufort and parts of nearby Badminton and Rassau are widely seen as being some of the most affluent areas in the County. House prices in these area are some of the most expensive in the area, with a new housing development at the top of Beaufort Hill being developed with house starting around £200,000 - £300,000.

The village also has a theatre with a ball room where many famous people played at the start of their careers. One of the most famous was Tommy Scott who later went on to become know worldwide as Sir Tom Jones.

Up until 1958 the village was served by Beaufort railway station, a station on the London and North Western Railway line from Abergavenny to Merthyr.

Places of interest in Beaufort

Parc Nant y Waun is a nature reserve incorporating 54 acres of grassland, mires and reservoirs which was officially opened in 2007.[2] Home to a many wildlife species, it includes a picnic area, outdoor classroom and angling Club.[3]

Edward (1750–1807) and Jonathan Kendall or Cendl of Dan-y-Parc Crickhowell established the works in 1779 on a 99-year lease. In 1833, by which time there were four furnaces, the works were taken over as an extension of their Nantyglo operations by the Bailey brothers, Joseph and Crawshay who put their sister’s son, William Partridge (1800–1862), in charge. Unmarried Agents (senior managers) of the local iron works companies lodged at the Rhyd-y-Blew, a drover’s inn, properly the hunting lodge of the Duke of Beaufort who carried out an annual rough-shoot of the area. The inn was at the end of the toll road from Merthyr Tydfil and for the rest of the year provided the drovers’ animals very good pasture and water in the Ebbw River. Suffolk-born Partridge married Charlotte Bevan, daughter of the Rhyd-y-Blew’s innkeeper, and remained in charge of the Beaufort iron works until his early death in 1862. The works soon closed. In conjunction with the then well-known Needham family of Beaufort mining engineers Partridge sons became involved in local collieries and established the substantial business later known as Partridge Jones. Grandson, rugby international and Barbarian, Joseph Edward Crawshay Partridge founded the Army Rugby Union. The Beaufort works house eventually became a fever hospital in 1902 and has since been demolished.

The ground, just south of Beaufort Hill, and close to a Chapel of Rest in the area known as Glanyafon, once occupied by the iron works has long been cleared and covered with houses. Giant pieces of slag remained in place until the most recent developments.