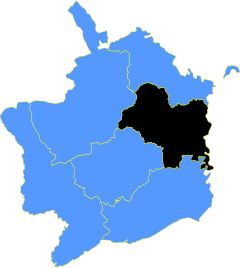 Raglan is a hundred of Monmouthshire, named after the village of Raglan, which it contains. Like the village itself, it is also spelled Ragland and Rhaglan.[1]

This hundred is less mountainous than that of Usk to the south and watered with fewer streams than any hundred in the county. It is however a fine fertile district abounding in rich arable and pasture lands and pleasingly diversified with gentle elevations and depressions with occasional valleys and hills. It is the least populous of Monmouthshire's hundreds, with a population of 7,980.