Raglan is a village in central Monmouthshire. It is located some 9 miles south-west of Monmouth, midway between Monmouth and Abergavenny on the A40 road very near to the junction with the A449 road. The fame of the village derives from its large castle, Raglan Castle, built for William ap Thomas, and now a magnificent 15th-century ruin.

The earliest market in Raglan was recorded in 1354.[2] The market cross in the town, which stands in the centre of the cross roads between the church and the Beaufort Arms Inn, consists now only of a massive base on which has been mounted a lamp post. In the large space around this stone the markets were held, the base of the cross doubtless forming the table on which bargains were struck.[1]

The agricultural roots of Raglan are illustrated by a 1397 account between the ‘reevem’ or reeve Ieuan Hire and Ieuan ap Grono and haywards (hedge wardens) Iorwerth ap Gwillym and Hoe ap Gwillym Goch.[3]

St Cadoc's is a substantial mediaeval church, extensively restored in the 19th century by Thomas Henry Wyatt. It houses some much-defaced tombs of the Lords of Raglan. The base of a fine pilgrim's cross can be seen in the churchyard. The first part of the church was built during the 14th century.

The earliest records of the manor of Raglan Court are found in 26 October – 28 July 1391 during the reign of Richard II.[4] At this time Raglan Castle was probably no more than a hill fort. After 1415 Raglan Castle was expanded from a small fort to the substantial castle that we see today.

By 1632, a Court House was established in Raglan. 'The jury to meet at the Court House at Ragland the 25th March next by ten of the clock under peyn of xls. apeece to have a view and inquire of lands in Landenny (Llandenny) and Ragland late of Philip David Morris', (Dec. 1632).[5]

The Civil War had disastrous consequences both for Raglan Castle as well as for Raglan village. Raglan Castle was besieged for two months from 3 June to 19 August 1646 by a strong force of Parliamentarians. The Castle finally surrendered to Thomas Morgan, when Thomas Fairfax arrived with 3,500 men and six deadly mortars. ‘The house almost starved … had like to have eaten one another’ was the report and the Parliamentarians called in the local people to help demolish the Marquess's home.[6]

The link between castle and village was severed. The castle ruins became neglected and were used as a quarry for those needing stone to repair their houses: dressed and moulded stones can be seen in farmhouses and cottages in the area.

Subsequent leet courts refer to the liberty of Raglan and in 1682 the hundred of Ragland is mentioned. Court Roll excerpts reflect the growing issues of the day: In 1680, ‘The bridge called Pontleecke upon the highway leading from Raglan towards Chepstow to be out of repair. Moses Morgan fined for not spending 14s of the parish money towards repairing the stocks and whipping post in the parish of Raglan’. In 1695 the repair of bridges are still under discussion, ‘The bridge called Pont y bonehouse in the town of Raglan, 1695. John Curre, gent., steward’.[7]

The castle has dominated the village for the past 350 years and continues to do so, drawing tourists by coach, train and car. Before Cadw took over, the Duke of Beaufort was the hereditary keeper of the castle while generations of Wardens lived either next to the castle or in the village of Raglan. There is no longer a direct train service to the village, the local railway station having closed in 1955, almost a decade before the Beeching Axe. Until the early 21st century the railway station buildings could still be seen from the A449 which passes close by and which runs on the bed of the railway line. The village continued to be an important thoroughfare in the 18th and 19th centuries, which explains its three substantial coaching inns, the Beaufort Arms, the Ship and the Crown where the Mail coaches would stop. 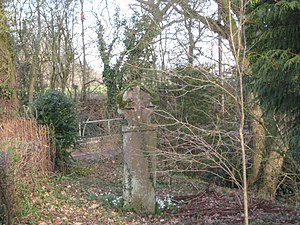 On Broom Lane, to the east of Broom House,[8] stands a mediæval stone cross, 6.2 feet (1.9 m) high, with an octagonal shaft.[9] Bradney describes it as a "singularly well-preserved stone, the head and shaft being hewn out of the same piece."[10] The cross was the subject of Article 452 in the series Monmouthshire Sketchbook written by Fred Hando for the South Wales Argus between 1922 and 1970. Hando writes that the cross of one of the only two remaining crosses in Monmouthshire, of 79, which survived with its head intact following the "Puritan folly of 1643."[11] He describes its name, the "White Cross", as deriving from its whitewashed appearance and states that "the appropriate name should be Grey Cross"[11] and suggests that the cross is "at least five centuries" old.[11]