From Wikishire
(Redirected from River Rhymney)
Jump to: navigation, search 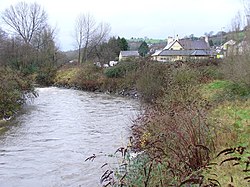 The Rhymney in Machen

The Rhymney River (Welsh: Afon Rhymni) is a river which carves the Rhymney Valley between Monmouthshire and Glamorgan. It empties into the sea east of Cardiff, entering the Severn estuary.

The river rises as one of the many streams running off the slopes of Cefn yr Ystraf, above Merthyr Tydfil and flows south, straight into the mining valleys, forming the boundary between Glamorgan and Monmouthshire from its source all the way to the sea.

Just a few miles south of Cefn yr Ystrad is the village of Rhymney and southward from here the Rhymney Valley is a busy place, industrialised when the mines were expanded in earnest in the nineteenth century, springing new villages along the length of the valley.

Below Ystrad Mynach, the river escapes the coal villages and wanders on to Caerphilly, after which it is forced eastwards by the Caerphilly mountain before resuming its southward course. Reaching the plains close to the sea, the Rhymney passes under the M4 motorway and cuts a green swathe between the Cardiff suburbs and St Mellons.

The last village on the river has the same name as the first, with allowance for spelling, both sharing a name with the river, for as it rises above Rhymney in the high valley, it reaches the sea below Rumney. The River Rhymney enters the Severn Estuary at the edge of Cardiff, in a broad, flat rivermouth flanked by tidal sandflats and sedge grass.

Path of the river 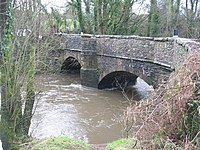 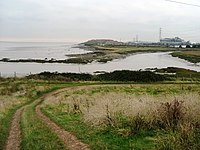 The mouth of the Rhymney (from the Monmouthshire side)

The river runs south, through (in order):

Being part of the coalfields and the iron producing area or the valleys, the Rhymney had poor water quality through most of the twentieth century. Since the closures of most of the coal mines, the water has become a great deal cleaner and is now full of fish and insect life and supports plenty of other wildlife.