Maesycwmmer is a village and parish in the far west of Monmouthshire. It is located on the east bank of the Rhymney River, opposite Hengoed in Glamorgan on the west bank.

Some have claimed that the village name should be spelled as Maes-y-Cymer, meaning "the field of the confluence of streams". As Maesycwmer, however, the name is probably derived from Maes (field) + cwmwr (footbridge). A local tradition holds that a large tree was blown down during a storm, forming a natural footbridge across the river. The footbridge was used by noted preacher and local pioneer of the printing press, the Rev. John Jenkins to cross the river to his house. Jenkins' house "Maesycwmmwr House" was built in 1826 and stood on the east side of the river. In the 1840 Tithe Map for the village is given as Maesycwmwr, with the spelling then varying to Maesycwmer over time.[1] 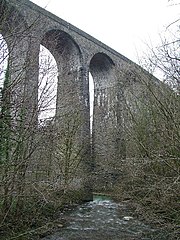 Centre section of the Hengoed Viaduct.

Maesycwmmer is still overshadowed by the vast Maesycwmmer Viaduct,[2] which dates from 1853 and which carried the Taff Vale Extension of the Newport, Abergavenny and Hereford Railway over the Rhymney valley. In 2000 the viaduct was re-opened for public pedestrian access.

Today the village features the "Wheel o Drams" (locally known as "The Stargate") sculpture by Andy Hazell, an unusual piece of modern art formed from a circle of coalmining dram trucks to commemorate the industrial heritage of this locality. The village shared three railway stations with neighbouring Hengoed over the years.

There are three pubs in Maesycwmmer: The Maesycwmmer Inn, The Butchers Arms and The Angel.

Maesycwmmer was a creation of the Industrial Revolution in the South Wales Coalfield. The houses built along the main road were purpose built for the workers that built the Maesycwmmer to Hengoed Viaduct. There is also a disused quarry in a field behind the houses of St Annes Gardens.