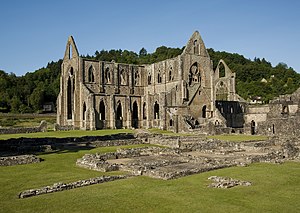 Tintern Abbey was founded by Walter de Clare, Lord of Chepstow, on 9 May 1131. It is situated in the village of Tintern in Monmouthshire, on the bank of the River Wye which forms the border between Monmouthshire and Gloucestershire. It was only the second Cistercian foundation in Britain. Its ruins inspired William Wordsworth's poem "Lines written a few miles above Tintern Abbey", Alfred, Lord Tennyson's poem "Tears, Idle Tears", Allen Ginsberg's "Wales Visitation", and more than one painting by J. M. W. Turner. The village of Tintern adjoins the abbey ruins, which are Grade I listed since 29 September 2000.[1]

Walter de Clare, of the powerful family of Clare, was first cousin of William Giffard, Bishop of Winchester, who had introduced the first colony of Cistercians to Waverley, Surrey, in 1128. The monks for Tintern came from a daughter house of Cîteaux, L'Aumône Abbey, in the diocese of Chartres in France.[2] In time, Tintern established two daughter houses, Kingswood in Gloucestershire (1139) and Tintern Parva, west of Wexford (1203).

The Cistercian monks (or White Monks) who lived at Tintern followed the Rule of St Benedict. The Carta Caritatis (Charter of Love) laid out their basic principles, of obedience, poverty, chastity, silence, prayer, and work. With this austere way of life, the Cistercians were one of the most successful orders in the 12th and 13th centuries. The lands of the Abbey were divided into agricultural units or granges, on which local people worked and provided services such as smithies to the Abbey. Many endowments of land on both sides of the Wye were made to the Abbey.

Development of the buildings

The present-day remains of Tintern are a mixture of building works covering a 400-year period between 1136 and 1536. Very little remains of the first buildings; a few sections of walling are incorporated into later buildings and the two recessed cupboards for books on the east of the cloisters are from this period. The church of that time was smaller than the present building and was slightly to the north. 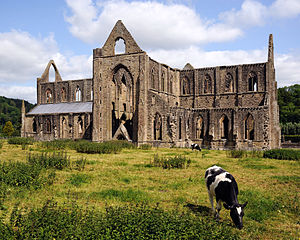 The Abbey seen from the A466 road

During the 13th century the Abbey was mostly rebuilt; first the cloisters and the domestic ranges, then finally the great church between 1269 and 1301. The first Mass in the rebuilt presbytery was recorded to have taken place in 1288, and the building was consecrated in 1301, although building work continued for several decades.[3] Roger Bigod, 5th Earl of Norfolk, the then lord of Chepstow, was a generous benefactor; his monumental undertaking was the rebuilding of the church. The Abbey put his coat of arms in the glass of its east window in thanks to him.

It is this great abbey church that is seen today. It has a cruciform plan with an aisled nave; two chapels in each transept and a square ended aisled chancel. The Decorated Gothic church represents the architectural developments of its day. The abbey is built of Old Red Sandstone, of colours varying from purple to buff and grey.

In 1326 King Edward II stayed at Tintern for two nights. In 1349 the Black Death swept the country and it became impossible to attract new recruits for the lay brotherhood. Changes to the way the granges were tenanted out rather than worked by lay brothers show that Tintern was short of labour. In the early 15th century Tintern was short of money, due in part to the effects of the Welsh uprising under Owain Glyndŵr against the English kings, when Abbey properties were destroyed by the Welsh rebels. The closest battle to the abbey was at Craig y Dorth near Monmouth, between Trellech and Mitchel Troy.

In the reign of King Henry VIII, his Dissolution of the Monasteries ended monastic life in England, Wales and Ireland. On 3 September 1536 Abbot Wyche surrendered Tintern Abbey and all its estates to the King's visitors and ended a way of life that had lasted 400 years. Valuables from the Abbey were sent to the Royal Treasury and Abbot Wyche was pensioned off. The building was granted to the then lord of Chepstow, Henry Somerset, 2nd Earl of Worcester. Lead from the roof was sold and the decay of the buildings began. 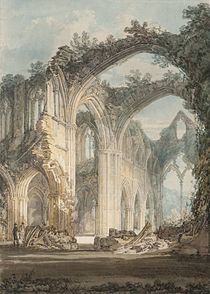 The Chancel and Crossing of Tintern Abbey, Looking towards the East Window by J. M. W. Turner, 1794

In the next two centuries little or no interest was shown in the history of the site. In the 17th and 18th centuries, the ruins were inhabited by workers in the local wire works.[3] However, in the mid eighteenth century it became fashionable to visit "wilder" parts of the country. The Wye Valley in particular was well known for its romantic and picturesque qualities and the ivy clad Abbey was frequented by "romantic" tourists. After the publication of the book Observations on the River Wye by the Reverend William Gilpin in 1782, tourists visited the site in droves. The importance of the abbey and its surroundings for later visitors is also reflected in Wordsworth's famous poem cited above, written in 1798. The site was best approached from the river until 1822, when a new turnpike road, now the A466, was opened through the valley, cutting through the abbey precinct. An engraving of Tintern Abbey was among the decorations of Fanny Price's sitting room in Jane Austen's Mansfield Park.

In the 19th century ruined abbeys became the focus for scholars, and architectural and archaeological investigations were undertaken. In 1901 the Abbey was bought by the crown from the Duke of Beaufort for £15,000. It was recognised as a monument of national importance and repair and maintenance works began to be carried out. In 1914 the Office of Works was passed responsibility for Tintern, and major structural repairs and partial reconstructions were undertaken — the ivy considered so romantic by the early tourists was removed.

American poet Allen Ginsberg took an acid trip at Tintern Abbey on July 28, 1967, and wrote his poem Wales Visitation. In the poem, about nature, he wrote: "...the lambs on the tree-nooked hillside this day bleating/ heard in Blake's old ear, & the silent thought of Wordsworth in eld Stillness/ clouds passing through skeleton arches of Tintern Abbey-/ Bard Nameless as the Vast, babble to Vastness!".[9][10]

In 1984 Cadw took over responsibility for the site.

The abbey is the setting for both the 1969 Flirtations music video Nothing But A Heartache and the 1988 Iron Maiden video Can I Play with Madness.