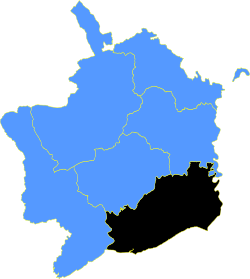 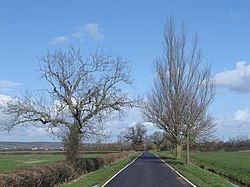 Flat landscape at Redwick on the Caldicot Level

Caldicot is a hundred of Monmouthshire, named after the town of Caldicot, which it contains.

The hundred has given its name to the Caldicot level, an area of low-lying estuarine alluvial wetland and intertidal mudflats adjoining the north bank of the Severn Estuary. Like Wentloog, this hundred contains many contrasted landscapes: The high lands of Wentwood, Devauden and Chepstow Park Wood boldly tower above the fertile marshes of Level and the flat meadows on the banks of the Wye. To the south are to be found the eastern suburbs of the city of Newport, as well as the towns of Caldicot and Chepstow.

It is the second-most populous of Monmouthshire's hundreds, with a population of 98,342.