The Kymin, or Kymin Hill, is a hill in Monmouthshire, overlooking the county town of Monmouth. It stands about a mile east of Monmouth, on the eastern side of the River Wye and adjacent to the boundary with Gloucestershire's Forest of Dean. The summit of the hill, about 800 feet above sea level, is known for its neo-classical monuments, built between 1794 and 1800.

The hill is owned by the National Trust and is a designated Area of Outstanding Natural Beauty.

The roundhouse at sunset

The Roundhouse is a white round tower, in two storeys with a crenellated roof, similar to a folly. It was constructed in 1794 on the wishes and from the pockets of a group of Monmouth's gentlemen, the Monmouth Picnic Club or Kymin Club, led by Philip Meakins Hardwick.[1] The subscription list was headed by the local landowner, the Duke of Beaufort, and eight Members of Parliament. The members of the Kymin Club were drawn from "the principal Gentlemen of Monmouth and its vicinity", and met each week "for the purpose of dining together, and spending the day in a social and friendly manner". They wished for a venue suitable for their regular meetings, dining and events, especially in the summer months. To this end it was designed and built with kitchens on the ground floor and a banqueting room above, with powerful telescopes fitted on the roof in season to fully take in the views. The house was made available, for a fee, for use by other appropriate parties.

It is said that that nine counties can be viewed from the roof: Gloucestershire, Monmouthshire, Glamorganshire, Breconshire, Worcestershire, Herefordshire, Radnorshire, Shropshire and Somerset.[2]

A bowling green was laid outside the roundhouse, and there were also stables. On the steep wooded escarpment beneath the house was laid out the Beaulieu Grove, a series of walks provided with seats from which to contemplate the views. Access to the site was improved by the construction, after 1799, of a new carriage road up the hill. The bowling green was later used for other sports, including hockey, and as a showground during major celebrations such as that for the centenary of the Battle of Trafalgar in 1905. 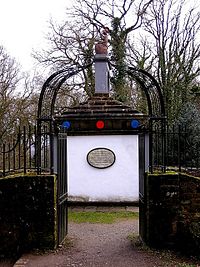 The hill has a Naval Temple on its summit, constructed by the Kymin Club in 1800 to commemorate the second anniversary of the British naval victory at the Battle of the Nile in 1798 and in recognition of sixteen of the British Royal Navy's Admirals who had delivered significant victories in other major sea battles of the age around the globe to that date. The memorial is classical in design, topped by a bronze seated figure of Britannia (now a replica). The Temple was dedicated by the Duchess of Beaufort, the daughter of Admiral Boscawen, one of those commemorated in the building.

The plaque on the temple reads:

The square Naval Temple has round plaques or medallions, four on each face, for each Admiral and the victory with which he was most closely associated and its date. The named Admirals are:

Vice Admiral Horatio Nelson himself visited Monmouth in 1802, along with Lady Hamilton and her husband, Sir William Hamilton, who died the next year. They travelled down river on the River Wye from Ross-on-Wye to Monmouth to cannonades firing, the town band playing and being greeted by the Mayor of Monmouth accompanied by all the local dignitaries of the county and local crowds. Staying in Monmouth for just a couple of days, Nelson visited the Naval Temple and the Roundhouse on Kymin Hill, where he breakfasted and admired the views. He was struck with the Naval Temple, saying that "it was the only monument of its kind erected to the Royal Navy in the Kingdom".

That this should be done not in one of Britain's major naval ports but in a small provincial county town in Wales far from the sea and with no great naval or seafaring traditions stayed with Nelson. This was of course three years before his own glorious victory, and death, at the Battle of Trafalgar in 1805 and Nelson's Column would not be built until 1843. The Britannia Monument, to Nelson, in Great Yarmouth would not be built until 1817. Monmouth has its own Nelson Museum in the town centre, started by the collections of Lady Llangattock, mother of Charles Rolls.

Up until 1797 Britannia was conventionally depicted holding a spear, but as a consequence of the increasingly prominent role of the navy in the war against the French, and of several spectacular victories, the spear was replaced by a trident. It is this that the Kymin Britannia wields. The navy had come to be seen... as the very bulwark of British liberty and the essence of what it was to be British... It was therefore entirely appropriate that the temple should be a naval one, that the heroes celebrated should all be naval officers, and that battles commemorated ones fought at sea." In building the temple, Monmouth staked its own claim to be the centre of British identity as the birthplace of King Henry V, of whom a statue was placed on the Shire Hall in 1792. Within two years of the battle of Waterloo in 1815 the name of the town's market place had been changed to Agincourt Square "in order to celebrate a victory of Henry V's that seemed as famous as Wellington's.

The Kymin is accessed by a winding road climbing up off the A4136 Monmouth to Forest of Dean road. The area is managed and conserved by the National Trust and there is a car park near the summit with an easy walk to both the Temple and the Roundhouse. The views on a clear day are magnificent.

The Kymin's views over Monmouth

The landscape features incorporated within the woodland at Beaulieu Grove were apparently destroyed early in the 19th century. The Woodland Trust is undertaking research into the history of the area, and provides access to the woods.[4]

The Kymin Dash is a cross-country hill-running race which used to take place annually as part of Monmouth's carnival and festival fortnight in July. The course covers about seven miles, circling the town and both ascending and descending the Kymin by forest tracks, field paths and minor roads. The course record is 38 mins 54 secs, set by P. Wheeler in 1985. After a short break, the Kymin Dash is set to return with a new course and new date in April 2013.