Haxey is a village in Lincolnshire, 22 miles northwest of the county town, Lincoln. It is famed throughout the county for its Twelfth Night game, the Haxey Hood, which has been played for over 700 years, reputedly making it "Britain’s oldest traditional tussle".[1]

The village is in the Isle of Axhome, between Westwoodside and Owston Ferry.

Haxey is on one of a series of low-lying hills of the isle of Axholme, which hills reach a maximum height of 133 feet out of the surrounding marshland. The River Trent makes its languorous way towards the Humber to the east, beyond Owston Ferry.

The civil parish of Haxey includes the villages of Haxey and Westwoodside, and the hamlets of High Burnham (the highest elevation of the Isle of Axholme),[2] Low Burnham, East Lound and Graizelound. 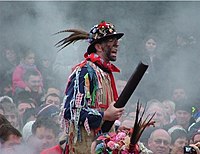 The Fool's speech at the Haxey Hood

The Haxey Hood is a traditional event throughout the parish. Its focus is a contest at Haxey village, held on the afternoon of 6 January, the Twelfth Day of Christmas (or the previous day if Twelfth Night falls on the Sabbath).

The game is a kind of large rugby scrum, called the "sway", which pushes a leather tube, called the "hood" to one of four pubs, where it remains until the following year's game.[3]

The official story is that in the 14th century, Lady de Mowbray, wife of an Isle landowner, John De Mowbray, was out riding towards Westwoodside on the hill that separates it from Haxey. As she rode over the hill her silk riding hood was blown away by the wind. Thirteen farm workers in the field rushed to help and chased the hood all over the field. It was finally caught by one of the farm workers, but being too shy to hand it back to the lady, he gave it to one of the others to hand back to her. She thanked the farm worker who had returned the hood and said that he had acted like a Lord, whereas the worker who had actually caught the hood was a Fool. So amused was she by this act of chivalry and the resulting chase, that she donated 13 acres of land on condition that the chase for the hood be re-enacted each year.

Folklore as it may be, the story of the Hood's origins are not unlikely (despite the lurid, neo-pagan speculation circulated in corners). Records show that John De Mowbray (29 November 1310 - 4 October 1361), the 3rd Baron Mowbray of Axholme, would be the most likely candidate for the husband of the lady. This would date the Hood to about 1359 when a deed granting land to commoners was enacted by the baron. This would make the Hood around 650 years old, making it likely to be the oldest surviving tradition in Britain (after the Abbots Bromley Horn Dance).

The Haxey Hood has similarities to other village combats, such as Ashbourne's Royal Shrovetide Football, the Shrove Tuesday Football Games in Sedgefield, Durham and Alnwick, Northumberland and the Hallaton Bottle Kicking contest in Leicestershire.

In the weeks before the event, the Fool and the Boggins tour nearby villages in order to collect money (traditionally to pay for the event, but now to raise money for local charities). Traditionally they sing a number of well-known folk songs including "John Barleycorn", "Cannons (Drink England Dry)" and "The Farmer's Boy". All wear their full festival costumes, the only exception being that the Fool's face is not marked.

At twelve noon work in the parish comes to a standstill and people start to make their way to Haxey village to gather and take part in the traditional ritual. At about 12:30 the officials start a tour of the ale houses involved, and drink free drinks at each pub, provided by the landlord as a token of good luck to try the bring the Hood its way. Many people follow this tour and consider it a vital part of the day. They start at the Carpenters Arms where they sing the traditional folk songs and ceremoniously paint the Fool's face. Then they move to the Kings Arms and then up towards the church taking in the Loco and the Duke William on the way, drinking and singing as they go. Around 2:30pm the officials leave the Duke and process up to the church. 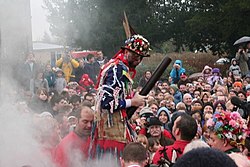 The Fool leads the procession and has the right to kiss any woman on the way. Once at the green in front of Parish Church, at around 2:30pm, the Fool makes his traditional speech of welcome standing on an old mounting block in front of the church known as the Mowbray Stone. During this speech a fire is lit with damp straw behind him. The smoke rises up and around him and this is known as ‘Smoking the Fool’. This is in fact a watered-down version of the earlier custom (abandoned at the beginning of the 20th century due to its obvious danger) in which a more substantial fire was lit with damp straw beneath a tree. The Fool was then suspended over the fire and swung back and forth until he was almost suffocated before being cut down and dropped into the fire, where he had to make his escape as best he could. At the end of the speech, the Fool finishes with the traditional words that the crowd chant along with him. They are: "hoose agen hoose, toon agen toon, if a man meets a man knock 'im doon, but doan't 'ot 'im," which translates as: "house against house, town against town, if a man meets a man, knock him down but don’t hurt him."

The Towns are the villages of Westwoodside and Haxey, and Houses the public houses of those villages:

After the speech, the Fool leads the crowd to the middle of a field where the game is to be played.

The village Grade I-listed parish church, dedicated to St Nicholas,[4] originates from the 12th and 13th century. It is of mainly Perpendicular Gothic style. The tower is of three stages, with an embattled parapet. Piers of the north arcade are Norman, and those of the south, with the chancel arch and chantry chapel, mainly Early English.

Haxey has a Church of England primary school[5] and a private day nursery.

The village contains three public houses, The Duke William, The Loco and The Kings Arms, two convenience stores, a doctor's surgery, and a local estate agency. Lincolnshire Co-op are shortly to open a store in the village, on the site of the old petrol station.