From Wikishire
(Redirected from Great Grimsby)
Jump to: navigation, search

Grimsby, or Great Grimsby is a seaport on the Humber Estuary in Lincolnshire. The port was well known to the Norse in the great seagoing age of that nation, and it was named in their language. According to local legend, Grimsby was first founded by Grim, a Danish fisherman,[1] 'By' means 'village' in Old Norse (and 'town' in modern Danish). 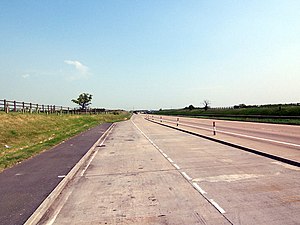 The A180; the landward route into Grimsby

The town was titled "Great Grimsby" to distinguish it from Little Grimsby, a village about 14 miles to the south, near Louth.

The town itself has a population of 87,574.[2] It is physically linked to the adjoining town of Cleethorpes, and 11,000 of its inhabitants live in the village of Scartho which was absorbed into Grimsby before laws on the green belt were put in place.

The River Freshney passes to the west of the town. Several A-roads end here, feedingthe ports of the north Lincolnshire coast.

Grimsby was founded by the Danes in the 9th century AD, although there is some evidence of a small town of Roman workers sited in the area some seven centuries earlier. Located on The Haven, which flowed into the Humber, Grimsby would have provided an ideal location for ships to shelter from approaching storms. It was also well situated for the rich fishing grounds in the North Sea.

The name Grimsby probably originated from the Grim's by, or "Grim's Village". This many be from the name of the Norseman or a Viking named Grim, the supposed the founder of the town, with the suffix -by, which is the Old Norse word for village. However, there is no evidence to support this late foundation legend beyond the town's name. There is however a Grim and Havelock Association which has claimed some evidence to back the legend up.

In Norse Mythology, 'Grim' (Mask) and 'Grimnir' (Masked One) are names adopted by the pagan god Odin when traveling unrecognised amongst mortals, as in the short poem known as 'Grimnir's Sayings' (Grimnismal) in the Poetic Edda,[3] so the intended audience of the Havelock tale (recorded much later in the form of The Lay of Havelock the Dane) may have implicitly understood the fisherman Grim to be Odin in disguise. The Odinic name 'Grimr/Grim' occurs in many English placenames within the historical Danelaw and elsewhere in Britain, examples being the numerous earthworks named Grimsdyke.[4] Every other British placename containing the element Grim- has been explained as a reference to Odin or his pre-Christian English counterpart, Woden, amongst which names are Grimsbury, Grimspound, Grime's Graves, Grimsditch, Grimsworne, so one may argue that 'Grimsby' is unlikely to have a different derivation.

Grimsby is listed in the Domesday Book, having a population of around 200, a priest, a mill and a ferry (probably to take people across the Humber, to Hull).

Grimsby also appears in the Orkneyinga Saga in this Dróttkvætt stanza by the Orkney Earl Rögnvald Kali:

"We have waded in mire for five terrible weeks; mud was not wanting where we were, in Grimsby's middle. But now away we let our beaked moose [=ship] resound merrily on the waves over the seagull's swamp [=sea] to Bergen."

St James' church, before its extension

During the 12th century, Grimsby developed into a fishing and trading port, at one point ranking twelfth in importance to the Crown in terms of tax revenue. The town was granted its charter by King John in 1201. The first mayor was installed in 1218.

Grimsby does not have town walls; it was too small and was protected by the marshy land around it. However, the town did have a ditch. In mediæval times, Grimsby had two parish churches, St Mary's and St James's, of which only St James's, now known as Grimsby Minster, remains. St James's shares with Lincoln Cathedral the folk tale of an Imp who played tricks in the church and was turned into stone by an angel.

In the 15th century, The Haven began to silt up, preventing ships in the Humber from docking. As a result, Grimsby entered a long period of decline which lasted until the late 18th century. In 1801, the population of Grimsby numbered 1,524, about the same size that it had been in the Middle Ages.

In the early 19th century, the town grew rapidly. The Great Grimsby Haven Company was formed by Act of Parliament in May 1796 (the Grimsby Haven Act) for the purpose of "widening, deepening, enlarging, altering and improving the Haven of the Town and Port of Great Grimsby". Grimsby's port boomed, importing iron, timber, wheat, hemp and flax. New docks were necessary to cope with the expansion. The Grimsby Docks Act of 1845 allowed the necessary building works.

The Dock Tower was completed in 1851, followed by The Royal Dock in 1852. No.1 Fish Dock was completed in 1856, followed by No.2 Fish Dock in 1877. Alexandra Dock and Union Dock followed in 1879. During this period the fishing fleet was greatly expanded. In a rare reversal of the usual trends, large numbers of fishermen from the South-East and Devon travelled North to join the Grimsby fleet. Over 40% of these newcomers came from Barking in Essex, and other Thames-side towns.

The arrival of the railway in 1848 made it far easier to transport goods to and from the port. Coal mined in the southern Yorkshire coal fields was brought by rail and exported through Grimsby. The population of Grimsby grew from 75,000 in 1901 to 92,000 by 1931 but then remained fairly static for the rest of the 20th century.[5]

The former Humber ferry, PS Lincoln Castle, is moored in Alexandra Dock. Once a pub/restaurant, it now lies by Corporation Bridge sailing into nothing but an uncertain future. Also in the dock is the Ross Tiger, a trawler which can be toured in the summer as part of the Fishing Heritage. 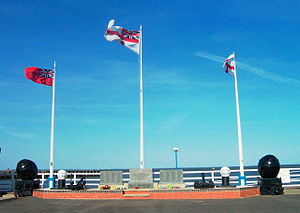 During the Second World War, Grimsby's status as a major port made it a focus of the German Luftwaffe. The pilots used the Dock Tower as a landmark and so avoided bombing it. It was later revealed that had the German invasion been successful, Grimsby would have been one of the first landing points in the north of England due to the combination of its location and its infrastructure, which might be why the town suffered significantly less bombing raids than neighbouring fishing port Hull whose geographical location would have made it harder to reach. However, Grimsby was still hit by numerous air raids during the war and 197 people were killed. Grimsby was also the first place in Great Britain to have the Butterfly Bomb used against it by the Luftwaffe in 1943. 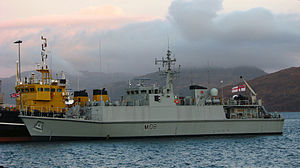 The Royal Dock was used as the UK's largest base for minesweepers, to patrol the North Sea. Minesweepers are military vessels using deep-sea trawling methods. There is a memorialnext to the dock. Grimsby class sloops saw service from the 1930s until 1966.

The name of Grimsby is inextricably linked with the sea fishing industry, which once gave the town much of its wealth. At its peak in the 1950s, it was the largest and busiest fishing port in the world.[6] However, as a result of the Cod Wars with Iceland this industry has been in decline for many years. It is still home to the largest fish market in the United Kingdom although most of what is sold is now brought overland from other ports or from Iceland in shipping containers.

Today, Greater Grimsby is home to around 500 food-related companies making it one of the largest concentrations of food manufacturing, research, storage and distribution in Europe. As a result, the local council has promoted the town as Europe's Food Town for nearly twenty years, albeit that few outside the town have eard of this and few within it can see any justification for it.[7]

Grimsby is recognised as the main centre of the British fish processing industry. In recent years, this expertise has led to diversification into all forms of frozen and chilled foods and consequently the town is one of the single largest centres of fish processing in Europe. More than 100 local companies are involved in fresh and frozen fish production, the largest of which is the Findus Group, comprising Young's Seafoods and Findus and whose corporate headquarters are in the town. Young's is a major employer in the area, with some 2,500 people based at its headquarters. From this base, Young's has a global sourcing operation supplying 60 species from 30 countries.[8]

Other major seafood companies include the Icelandic-owned Coldwater Seafood,[10] employing more than 700 people across its sites in Grimsby and Five Star Fish,[11] a supplier of fish products to the UK foodservice market. The £5.6 million Humber Seafood Institute[12] opened in 2008 and is the first of its kind in the UK. Backed by Yorkshire Forward, North East Lincolnshire Council and the European Regional Development Fund, the HSI is managed by the local council and tenants include the Seafish Industry Authority and Grimsby Institute of Further & Higher Education. Greater Grimsby is a European centre of excellence in the production of chilled prepared meals, and the area has the largest concentration of cold storage facilities in Europe.[13]

The Port of Grimsby and Immingham is the United Kingdom's largest port by tonnage.[14] Its prime deep-water location on the Humber Estuary, gives companies direct access to mainland Europe and beyond. Benefiting from a prime deep-water location on the Humber Estuary, one of Europe's busiest trade routes, it plays a central role in the commercial life of the UK. The port is operated by Associated British Ports (ABP), the UK's largest and leading ports group. Grimsby and Immingham, and ABP's 19 other ports, form a network across the United Kingdom capable of handling every conceivable type of cargo. 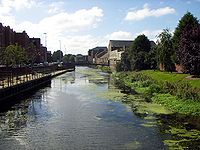 The River Freshney, which flooded in 2007

The 18 sirens, at various locations around the flood risk area of Grimsby and Cleethorpes, should reach 25,500 households to warn them of portending floods. The sirens will only be sounded in the event of the Environment Agency issuing a severe flood warning for tidal flooding or if there is a likelihood of the sea defences being breached. The sirens make a variety of sounds, from the traditional wailing sound to a voice message. The alarms are said to sound like Second World War air raid sirens, with an 'all clear' system in place.

In the event of flood siren activation, which can give up to six hours notice of pending floods, residents are advised to go indoors and listen to local radio stations BBC local radio or Viking FM.

Testing of the sirens takes place annually on 26 October, and residents are not required to take any action.

Places of interest and landmarks 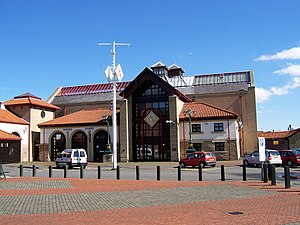 Greater Grimsby is undergoing a radical transformation as part of a “Renaissance Towns Programme”. The 25-year vision for Grimsby involves making a town which is attractive and an economically and socially desirable place to live, visit, work and play. The aim is to bring new life to the town centre by creating quality surroundings and rejuvenating the historic waterside and docks for the enjoyment of all.[15]