Barton-upon-Humber or Barton is a small town in northern Lincolnshire, standing on the south bank of the Humber, and at the end of the Humber Bridge. It is 31 miles north-northeast of the county town, Lincoln, and 6 miles southwest of Kingston upon Hull on the Yorkshire shore. Other nearby towns include Scunthorpe to the southwest and Grimsby to the southeast.

The town is famed for its ancient church, whose tower is a rare example of a surviving large Anglo-Saxon building.

The town was formerly an important centre for the manufacture of bicycles; Hopper's Cycles were established in the town in 1880 in the Hopper Building.

The town is known for its Anglo-Saxon church tower, part of the parish church, St Peter's. Also there have been many Anglo-Saxon archaeological finds within the town. An Anglo-Saxon inhumation cemetery at Castledyke South, in use from the late fifth or early sixth century until the late 7th century, was investigated and partially excavated 1975-90: the skeletal remains of 227 individuals were identified, including one who had undergone (and survived) trepanning.[1]

The church was reopened in May 2007 as a resource for medical research into the development of diseases, and ossuary, containing the bones and skeletons of some 2,750 people whose remains were removed between 1978 and 1984 from the 1,000 year old burial site, after the Church of England made the church redundant in 1972.[2] [3]The significance of the human remains lies in their representing the pathology of an isolated community over the period ca.950-ca1850. The excavation report on what is believed to be Britain's most extensively investigated parish church, including a volume on the human remains, was published 2007-11. [4]

A ferry to Hull began in 1351, being granted by Edward II running until 1851, but this was superseded by a ferry at New Holland which began in 1820. The Humber Bridge put an end to the ferries at last. 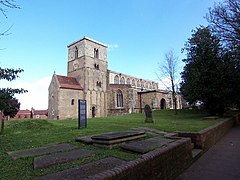 There are two churches in Barton-upon-Humber:

Unusually for large mediæval churches in a small town, they are located only about five hundred feet apart. St Peter's is a large, mostly Anglo-Saxon, church and predates St Mary's — which may have originated as a chapel on the original market place, enlarged and increasing in importance as the town's trade thrived in the 12th and 13th centuries.