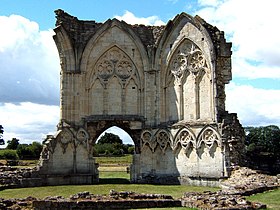 Thornton Abbey was a mediæval abbey located close to the small Lincolnshire village of Thornton Curtis.

It was founded as a priory in 1139 by William le Gros, the Earl of Yorkshire, and raised to the status of Abbey in 1148. It was a house for Augustinian or black canons, who lived a communal life under the Rule of St Augustine but also undertook pastoral duties outside of the Abbey. Officers within the Abbey besides the abbot and prior included a cellarer, bursar, chamberlain, sacrist, kitchener and an infirmer.

The abbey was closed in 1539 by Henry VIII as part of the Dissolution of the Monasteries. Thornton was a wealthy and prestigious house valued at the dissolution at the considerable sum of £591 0s 2 ¾ d.

Thornton Abbey railway station is nearby. 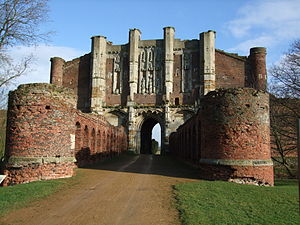 The gatehouse of Thornton Abbey from the outside 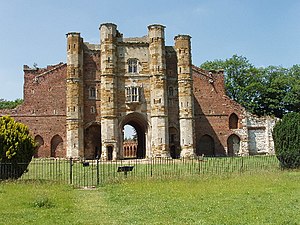 Gatehouse of Thornton Abbey from the inside

The founding abbey building from the 12th century was Romanesque in style, but nothing of it remains above ground.

The later abbey from the 13th/14th centuries was built in Early Gothic style. Little remains of the building, except for three walls of the chapter house and part of the cloister, though the groundplan of the abbey is traced out.

The main interest lies in the gatehouse which is amongst the earliest largescale uses of brick in England. It stands two storeys high and is structurally intact. There are few windows in the building, and the internal dimensions are cramped due to the thickness of the walls.

The outside of the building is adorned with three almost lifesize statues directly above the gate. A bridge over the moat adjoins the gatehouse and is fortified with walls and guardrobes.

Since the dissolution the site has been owned by: Henry Randes (the Bishop of Lincoln); Sir Robert Tyrwhitt of Kettleby; Sir Vincent Skinner of Westminster; Sir Robert Sutton; George Appleby; and in 1816 Charles, 1st Baron Yarborough.

In May 1859, members of the Lincoln Diocesan Architectural Society visited the site and were given a guided tour by the Rev. J. Byron of Killingholme. A report of the tour, published by the Stamford Mercury, records that access to site had been restricted due to damage 'by bands of modern Vandals'.[1] Brass effigies, some in place others 'strewed amongst the growing grass', and the entrance to a subterranean passageway were also observed.[1]

In 1938 the fifth earl handed the care of the Abbey remains to HM Office of Works. The site is currently in the care of English Heritage and is open to the public.

The nearby Abbot's Lodge is a grade I listed building. Elements of the ground floor of the monastic range of Thornton Abbey were converted to a house and the first floor rebuilt in the 17th century, reputedly by Sir Vincent Skinner, but unfortunately collapsed on completion. [2]