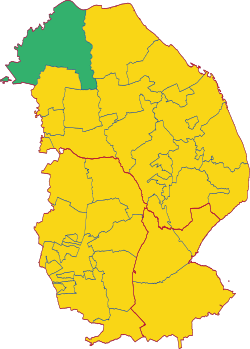 Manley is a wapentake in the Parts of Lindsey, the northern division of Lincolnshire, adjacent to the borders with Nottinghamshire and Yorkshire. It had a population of 130,726 in 2011. It is bounded by Yarborough to the east; by Walshcroft to the south-east; and by Aslacoe and Corringham to the south. To the south-west lies Nottinghamshire, and to the north and west, Yorkshire. The Isle of Axholme forms the western division of Manley wapentake.

*: Partly in Yorkshire.
†: In Corringham wapentake.
‡: Mostly in Nottinghamshire.