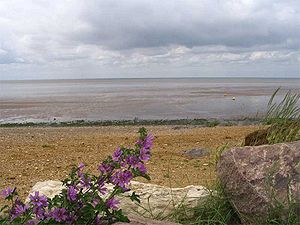 The Wash, as seen looking west from Heacham, just south of Hunstanton

The Wash is the square-mouthed bight on east coast of Britain; looking on the map like a square-cut bite out of the coast where Norfolk meets Lincolnshire. It is technically an estuary, into which flow several rivers and is among the largest estuaries in the United Kingdom. It is fed by the Rivers Witham, Welland, Nene and Great Ouse.

From at least the 16th century up to the eighteenth century the name of the bay was in the plural; "the Washes". The name from is from the Old English 'wæsc; a sandbank washed by the sea. 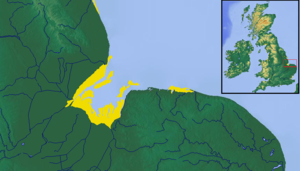 Map of the Wash

The Wash shows as a large indentation in the coastline of eastern England, separating the curved coast of East Anglia from Lincolnshire. It is formed by a large square-sided bay, each side about 15 miles long. The eastern coast of the Wash is entirely within Norfolk, and extends from a point a little north of Hunstanton in the north to the mouth of the River Great Ouse at King's Lynn in the south. The opposing coast, which is roughly parallel to the east coast, runs from Gibraltar Point to the mouth of the River Welland, all within Lincolnshire. The southern coast runs roughly northwest-southeast, connecting these two river mouths and is punctuated by the mouth of a third river, the River Nene. The Nene used to snake across a marshland known as Cross Keys Wash or Sutton Wash, but it was straightened in 1827-30 and the surrounding land drained and reclaimed. The border of Norfolk and Lincolnshire is drawn down the centre of this former marsh.

Inland from the Wash the land is flat, low-lying and often marshy: these are the Fens of Lincolnshire, Cambridgeshire, Norfolk and Huntingdonshire.

Owing to deposits of sediment and land reclamation, the coastline of the Wash has altered markedly within historical times; several towns once on the coast of the Wash (notably King's Lynn) are now some distance inland.

Much of the Wash itself is very shallow, with several large sandbanks—such as Breast Sand, Bulldog Sand, Roger Sand and Old South Sand—exposed at low tide, especially along its south coast. For this reason, navigation in the Wash can be hazardous for boats. A lightship marks the entrance to the Lynn Channel, the one safe channel from the North Sea to the Wash's south coast.

Creation of the Wash

At the end of the last Ice Age, while the sea level remained lower than it is today, the rivers Witham, Welland, Glen, Nene and Great Ouse joined into a large river.

The deep valley of the Wash was formed, it is reckoned not by the interglacial river, but by ice of the Wolstonian and Devensian stages flowing southwards up the slope represented by the modern coast and forming tunnel valleys of which the Silver Pit is one of many. It was this process which gave the Silver Pit its depth and narrowness. When the tunnel valley was free of ice and seawater, it was occupied by the river. This kept it free of sediment, unlike most of the tunnel valleys. Since the sea flooded it, the valley seems to have been kept open by tidal action. During the Ipswichian Stage, though the Wash River probably flowed by way of the site of the Silver Pit, the tunnel valley will not have been formed at this stage as its alignment seems inconsistent.

The Wash is a Special Protection Area (SPA) under legislation. It is made up of very extensive salt marshes, major intertidal banks of sand and mud, shallow waters and deep channels. The seawall at Freiston has been breached in three places to increase the saltmarsh area, to provide an extra habitat for birds, particularly waders, and also as a natural flood prevention measure. The extensive creeks in the salt marsh, and the vegetation that grows there, helps dissipate wave energy thus improving the protection afforded to land behind the saltmarsh. This last aspect is an example of the recently developing exploration of the possibilities of sustainable coastal management by adopting soft engineering techniques. The same scheme includes new brackish lagoon habitat.

On the eastern side of the Wash, one finds low chalk cliffs with their famous stratum of red chalk, at Hunstanton, and gravel pits (lagoons) at Snettisham RSPB reserve, which are an important roost for waders at high tide. This SPA borders onto the North Norfolk Coast Special Protection Area.

To the northwest, the Wash extends to Gibraltar Point, another Special Protection Area.

The partially confined nature of the Wash habitats, combined with the ample tidal flows, allows shellfish to breed, especially shrimp, cockles and mussels. Some water birds, for example oystercatchers, feed on shellfish. It is also an important breeding area for common terns, and a feeding area for marsh harriers. Migrating birds, such as geese, ducks and wading birds, come to the Wash in huge numbers to spend the winter, with an average total of around 400,000 birds present at any one time.[1] It has been estimated that around two million birds will use the Wash for feeding and roosting during their annual migrations.

The most famous incident associated with the Wash is the tale of King John's losing the Crown Jewels in the Wash.

According to contemporary reports, John was travelling from Spalding in Lincolnshire to Bishop's Lynn in Norfolk, and was taken ill and decided to return. While he took the longer route by way of Wisbech, he sent his baggage train, including his crown jewels, along the causeway and ford across the mouth of the Wellstream.[2] This route was usable only on the lower part of the tide. The horse-drawn wagons moved too slowly for the incoming tide, and many were lost.

The present-day location of the accident is normally supposed to be somewhere near Sutton Bridge, on the River Nene. The name of the river changed as a result of redirection of the Great Ouse during the 17th century and Bishop's Lynn became King's Lynn in the Henrician reformation. Astronomical study, however, permits a reconstruction of the tide tables of the relevant day and it seems most likely, given travel in the usual daylight hours, that the loss was incurred in crossing the Welland Estuary at Fosdyke.

There is also a rumour that John left his jewels in Lynn as security for a loan and arranged for their "loss." This looks likely to be apocryphal. However that may be, he passed the following night, that of the 12th to 13 October 1216, at Swineshead Abbey, moved on to Newark-on-Trent and died of his illness on 19 October.

Sailing from out of the South Lincolnshire Fens into the Wash (especially with respect to shell-fishing) is traditionally known locally as "Going Down Below". Although still used today, the origin of the phrase is unknown, and is generally an oral tradition without documentary evidence.

This phrase is however also used in Newfoundland, particularly the Bonavista area. It is used to refer to going down to sea level, mainly a beach or water mark.

Sights about the Wash

The Boston Stump, the tower of the Church of St Botolph in Boston, Lincolnshire, can on clearer days be seen from the Norfolk side of the Wash.

The Outer Trial Bank, a remnant of a 1970s government experiment, lies approximately 2 miles off the southern coast near the River Nene.