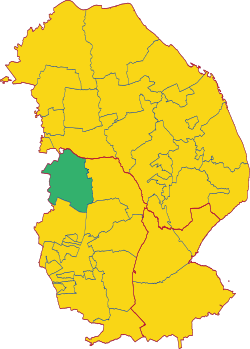 Boothby Graffoe is a wapentake in the Parts of Kesteven, the south-west division of Lincolnshire, adjacent to the border with Nottinghamshire. Including those parts of Lincoln south of the Witham, it had a population of 93,137 in 2011. It is bounded by Loveden to the south; by Langoe to the east; by Flaxwell to the south-east; and by Lawress in Lindsey to the north.

*: South of the Witham. Remainder of Lincoln in Lawress.